Americans are reclaiming their political voices from the power of concentrated wealth.

Frances Moore Lappé 10/9/2006 Fall 2006
Hungry for democracy
Hungry for democracy
Frances Moore Lappé
10/9/2006
UU World Magazine Fall 2006 , published by the Unitarian Universalist Association
Forum
In a favorite childhood memory, I am lying in my bedroom down a short hallway from the kitchen. The aroma of percolating coffee and the hum of adult chatter comfort me, as my parents and their friends debate how they can racially integrate the Unitarian church they’re founding or aid refugees after the Soviets invade Hungary.

I know I want to be like them. I want to do what grownups do: figure out the big important things.

Then, in my twenties, one really big, important thing hit me—the horror of world hunger. All other questions seemed to pale before this central one—how to sustain life. It was the 1960s and Neo-Malthusians were telling us that widespread hunger was proof positive that Homo sapiens had overrun Earth’s capacities. Which sounded plausible—until I looked at the facts.

Tucked away in the U.C. Berkeley agricultural library, poring over UN statistics, I quickly learned that the world was (and still is) producing enough food to make its entire population chubby.

Since no one chooses to go hungry, I concluded that the cause of hunger is not the scarcity of food but the scarcity of democracy. Citizens have been denied a voice in their own survival. For fifteen years, especially through my book Diet for a Small Planet, I labored to awaken people to the human-made causes of hunger: The increasing concentration of power from the village level to the level of international commerce makes hunger inevitable, no matter how much food we produce.

By the 1980s, sounding the alarm and bemoaning the dearth of real democracy became less and less rewarding. Two questions wouldn’t let go of me:

Just what does democracy look like, that is strong and vital enough to get at the roots of hunger? And how do we build it? I’ve come to believe that there are no more important questions, and the journey to answer them has taken me to five continents and deep within myself.

Like most Americans, I grew up with the notion that democracy boiled down to two things: elected government and a market economy. Since we have both, there wasn’t much to do except show up at the polls and to shop. Voilà, we have democracy!

From there it was easy to jump over the unpleasant fact that democracy and the now-dominant version of a market economy are actually based on opposing principles. Democracy depends on the wide dispersion of power so that each of us has a voice. But our peculiar version of the market is driven by a single rule, highest return to existing wealth, that does the opposite: It inexorably concentrates wealth and power, denying people a real voice.

In this single-rule economy, growth can’t end poverty. During the 1990s, every $100 in economic growth worldwide brought just 60 cents in poverty reduction, according to a New Economic Foundation report. Worldwide, 691 billionaires control more wealth than the poorer half of the population earns in a year.

The U.S. Census Bureau reports that between 1979 and 2001 the income of the top 20 percent of earners in the United States increased by more than half, while the bottom 20 percent saw virtually no gain. According to an Economic Policy Institute study, the average CEO in America now earns as much by lunchtime on the first day of the year as a minimum wage worker earns the entire year!

Thin Democracy cannot address our planet’s interlinked crises. By their very nature, our biggest problems don’t yield to top-down strategies; solutions require invention and widespread changes in behavior that depend on the experience, ingenuity, and buy-in of citizens closest to the problems. Yet, in concentrating power, Thin Democracy excludes precisely the broad-based engagement we need.

Plus, Thin Democracy can’t create healthy societies because it denies human complexity—our innate need for community, for basic fairness, and for efficacy in contributing to something grander than our own survival. Forcing us to bury these deep needs, Thin Democracy leaves many feeling alienated and powerless. Little wonder that the World Health Organization tells us that depression is now the fourth leading contributor to the “global burden of disease”—and that it is expected to place second by 2020.

Fortunately, however, and in the nick of time, a new frame for democracy is emerging. I call it Living Democracy.

It’s not something done for us or to us; it’s what we ourselves do. Living Democracy is not a set system but a set of system characteristics, ever evolving and driven by human values that span all great wisdom and religious traditions. Among them are inclusion, fairness, and mutual accountability.

Living Democracy assumes that these values apply equally well in economic and cultural life as in the political realm. So we don’t have to leave behind our humanity as we engage in these wider worlds.

It is not about simply dividing up power in new ways; it is about generating new power to create the world we want. Very practically, it means removing the power of money from decision-making and infusing the power of citizens’ voices throughout public life.

Americans are reclaiming their political voices from the power of concentrated wealth. In only eight years, working people in New York State have cracked the two-party lockdown. Using “fusion voting,” which obviates voters’ fears of “wasting” their ballots on a third party, the new Working Families Party has already been critical to lifting the state minimum wage by $2 an hour. And grassroots-led campaign-finance reforms are getting traction in states like Maine and Arizona, limiting the influence of private wealth on elections.

New models are legitimizing democratic values in our economic choices. In the last two decades, socially responsible investments have grown from $40 billion to $2 trillion; and in half that time a fair trade movement has begun to affect purchasing from Brueggers Bagels to Safeway, lifting more than a million small coffee farmers out of destitution.

A growing global cooperative movement is proving that markets can work without capitalists. In Italy’s Emilia Romagna region, thousands of cooperatives are responsible for more than 30 percent of economic activity. Today more people in the world are members of cooperatives than own shares in publicly traded companies.

“Democratic schools” that involve students in decision making are achieving academic success, including high rates of college admission. Their experience suggests that engaging in public problem solving and achieving individual success can go hand in hand. And in law enforcement, a restorative justice emphasis increasingly relies on community leadership to rehabilitate nonviolent transgressors and return them to the community, with huge public savings.

These initiatives and thousands more reflect an incremental but dramatic shedding of Thin Democracy. They begin to show us what Living Democracy looks like: No longer a fixed structure apart from us, democracy becomes us, in both meanings of the phrase. Evolving in relationships of mutuality, Living Democracy feels more and more like the social analog of ecology itself.

Sadly, though, I meet many people who feel depressed and powerless. They disparage their acts as mere drops in the bucket, as useless. But think about it: Buckets fill up really fast on a rainy night. Such feelings of powerlessness come not from seeing oneself as a drop, but from not seeing the bucket.

To uproot feelings of powerlessness we must struggle to define the bucket—to consciously construct a new frame that gives meaning to our actions. And that begins when we recognize that our multiple crises are neither separate nor random: They flow from a partial, and thus distorted, view of our nature, which leads us to turn over our fate to forces outside of our control, especially to a one-rule economy that violates our deepest sensibilities. 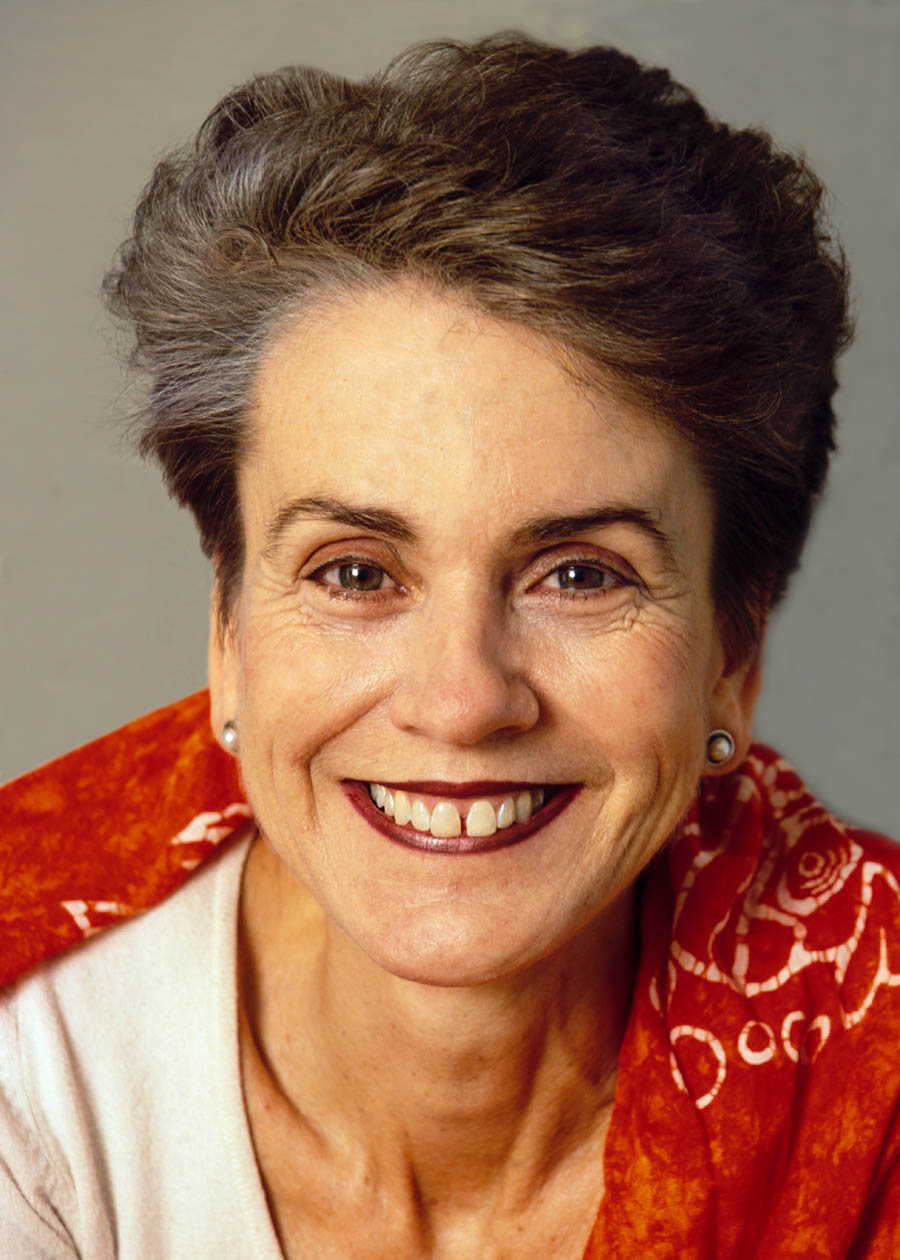 Frances Moore Lappé has written or co-authored fifteen books, received seventeen honorary degrees, and is co-founder of Food First, the American News Service, and the Small Planet Institute. She attends the First Church in Belmont, Massachusetts.