Lessons from an elephant sage

The most important thing Samboon taught me was how to speak from my deepest and most grounded place.

Rain T. Van Den Berg | 5/25/2009 | Summer 2009
Lessons from an elephant sage
Lessons from an elephant sage
Rain T. Van Den Berg
5/25/2009
UU World Magazine Summer 2009 , published by the Unitarian Universalist Association
Reflections
Personal Inspiration
A slow rising panic seized me as I straddled the animal that could kill me in less than three seconds. Through a strained smile as the camera clicked, I knew how it would happen: a slight shifting of her weight to throw me to the ground, then a step on my head. Efficient. Little fuss.

I came to this camp in Thailand to work with Samboon, a beautiful 25-year-old Asian elephant, and Takaeo, her mahout (handler). I have long been drawn to elephants, and wanted to get to know one firsthand. So there I was, my first day, and my mahout jumps down to get a picture. I was alone on the elephant, legs straddling her thickly muscled neck, terrified but determined.

For the next two weeks, I spent ten to twelve hours a day with Samboon and Takaeo as they went through their workday giving rides to tourists. Samboon spent the night in the jungle to feed, tied with a long chain. The chain allowed her to eat in a large area and kept her from the delicious and off-limits banana farmlands nearby. In the morning Takaeo and I would hike out to fetch her and walk the very slow and steady elephant pace two miles back to camp to start the workday. We’d bathe her in the river, and then she and her peers would give rides and take breaks until the evening bath and walk back to the jungle again.

This is a good life for a working elephant, where the only alternative would be brutal illegal logging. The region has little habitat left for elephants to roam wild. Takaeo was a good mahout and always treated her kindly. She was one of the best-fed elephants in camp.

Takaeo came from a long line of Burmese mahouts. He learned the way of elephants from his father and was teaching his son the same. His style was one of firm but loving persuasion built on trust. His son already was an accomplished mahout at the age of 12. Traditionally a son would learn from his father and his father’s elephant until he turned 13, then he would capture and train a young elephant of his own. Since elephants and humans have similar life spans, the elephant’s development and working life would parallel its mahout’s. Having emigrated with his family from Burma to Thailand, Takaeo was a mahout-for-hire, without his own elephant. He had worked with Samboon for several years and had a good rapport with her.

On the morning of my third long day, I was walking next to Samboon’s head, tapping her belly behind me with a switch and telling her to keep going. She had to be encouraged constantly or she would stop every ten feet to tear into the foliage. She was trying to get as many snacks in before her long day with only small morsels from the tourists.

Suddenly I could feel her attention on me; she was looking at me. She stopped and looked harder. Then she started to smell me all over with her trunk, searching out the stories of my body. I stood as still as I could even though the coarse hairs on the tip of her trunk tickled my skin. I knew I was being sized up, and I wanted to pass the test. It was as if she had just noticed that I was still there, that I might be important to note, not just one of those humans that’s come and gone in an hour. It was intimidating and thrilling to be inspected so carefully. Then with a little snort, she was done. I guess I passed. Takaeo laughed, and we were off.

Over the next two weeks we got to know each other. She got used to my backpack full of treats and would watch for me and perk up when I came into view. I loved giving her small basketball-sized watermelons that she would toss lightly into her mouth like bon bons. She would crush them with her mouth, the juice running out of her mouth as she rumbled with satisfaction.

The most important thing Samboon taught me was how to speak from my deepest and most grounded place. I would be riding Samboon with Takaeo behind me. He would whisper the command to me, and I would say it to her. I didn’t believe I had any authority to tell her what to do. I wasn’t confident I was even saying the strange words right. Samboon would ignore me like a three-year-old human saying “You’re not the boss of me!” A subtle poke from Takaeo and she would comply, but I knew she wasn’t doing it for me. As I spent more time with her, and Takaeo lessened his presence, I learned to find my deeper voice of authority.

I learned to sink through the layers of my mind and awareness. Inside my mind, it went like this: “My legs hurt.” Let that be. “There are insects buzzing and pulsing.” Let them be. “I don’t know if I’m saying ‘Toouay’ right; does she even understand me?” She will understand.

She knew when I was distracted, nervous, or frustrated. From that place I had no authority. When I sunk below those things and spoke with absolute focus, she responded immediately. So during my time with her, I got better and quicker at getting through the noise to the stillness. It was amazing to have that kind of tangible feedback for such a fiercely internal process.

My last day at the camp I rode Samboon by myself around the huge yard. She listened fairly well, though she was sorely tempted by a tapioca field we passed. When we made it by without incident, I told her “Bon suung, Samboon,” and she put up her trunk to receive a banana treat. For the next five minutes she’d stop every few steps and put up her trunk to see if I’d give her another. “B’ah! B’ah! (Cut it out!) Heuah, Samboon! (Go!)” I kicked the backs of her leathery ears where my feet dangled, and she finally gave up with an exasperated snort. We made it all the way back to the loading area, tears streaming down my face. I fed her the last of the bananas as I admired one last time her inch-long eyelashes and amber eyes.

Samboon’s lessons continue to help me in my daily life. I have moments where my mind is so distracted by traffic, “to-do’s,” work stress, fatigue, that it feels I can’t get anything done. On a good day, I realize what’s happening and let myself relax and sink down through the layers of worry and trivialities, down to the source. When I speak from that place with clarified intention, the world, too, responds. I still have a lifetime of practice to get it so I can live and speak from there all the time. But Samboon made it simple for me. Speak from a place of distraction, and the elephant will not move. Speak from the place of authority, clarity, and love, and the elephant moves. 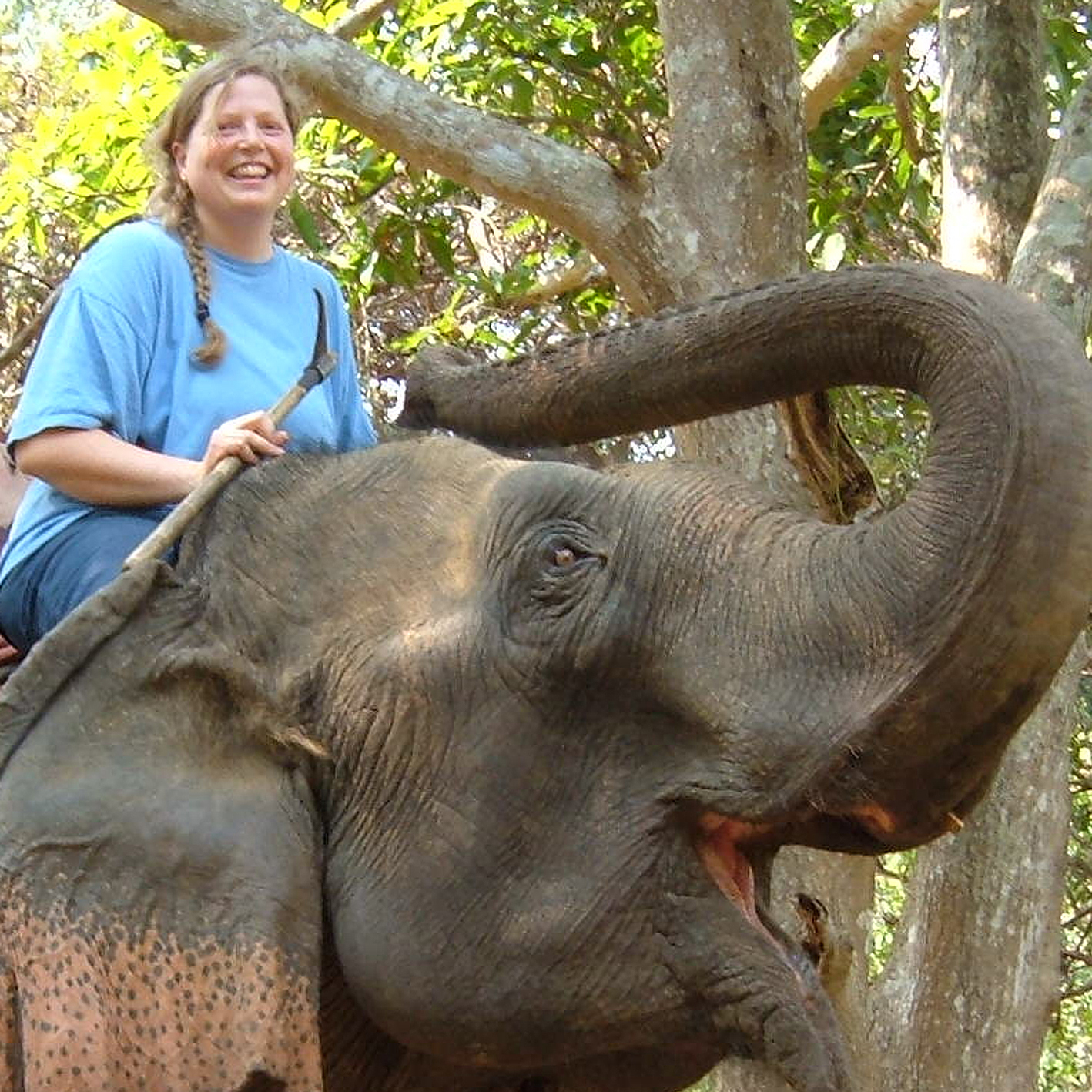 ﻿Rain T. Van Den Berg is an avid traveler and member of the First Unitarian Society of Denver.