Meaning in the midst of war

Easy answers lead to difficult questions. So why not just start with the questions?

“Bison Main, this is Dark Horse 6-1, show SP Camp Nathan Smith, four victors, nineteen pax have the chaplain and we are en route to PSS1.”

“Dark Horse 1-6, be aware possible IED on your route vicinity of the Kandahar University. Be advised that air is red no medivac birds available.”

I rumble down the street in the back of an MATV, a smaller more maneuverable version of the Mine Resistant Ambush Protected truck. Piped into my headset is a soldier’s “combat mix,” a surreal mix of death metal and Southern fried rock. The convoy commander, 23-year-old Sergeant Barley, navigates the four vehicles (victors) and nineteen passengers (pax) through the ancient, crowded, and dangerous streets of Kandahar City, Afghanistan. There have been several IEDs found across the city in the past seventy-two hours. With vigilance and luck, all were found before they detonated. Still we are prepared, every time we go out, to get blown up. Most of the time when this happens, the truck is mine-resistant enough to save lives . . . most of the time. This is the backdrop against which I conduct my ministry every day.

I am headed to Police Sub Station 1 (PSS1). Just weeks before, a suicide bomber attacked this PSS, killing a young soldier and wounding five others. I arrived forty-five minutes after the blast and helped the remainder of the platoon clean up the debris and begin putting their lives back together. I prayed over the mangled body of the soldier before he began his long trip home. I helped mop up blood from the floors and walls. I literally dug in and did the hard work of combat ministry. This was not the first dead soldier I have sent home. He was not the last. I am acutely aware that before I step foot on American soil again, there will be more.

As an Army chaplain, my job is to help young men and women make sense out of all this. But there are times I cannot make sense of it myself. In this place, existential questions are not philosophy discussed at coffee hour. While every human being must struggle with what it means to be human and thus to be mortal, zipping a black bag over the breathless body of a friend puts a new sense of urgency on the questions of life and death.

That is one of the reasons I am here, why I became an Army chaplain, and why I rumble down the crowded and dangerous streets of Kandahar City nearly every day. As a Unitarian Universalist, I understand there are no easy answers. Instead, I seek to engage the young men and women I meet in the struggle for human meaning. Many chaplains do not share this approach to ministry. They offer the easy answers. They imagine a deity that has charted each of our courses in life from our first breath to our last. I cannot share this point of view. If this is true, has God placed some of us on a collision course with an IED? Some tell soldiers to pray the sinner’s prayer and never fear death again. If your friend never said these words, should you fear for him?

Easy answers lead to difficult questions. So why not just start with the questions?

As time goes on in a combat zone, the questions don’t slow down and the answers don’t get easier. Far from home with the threat of violence looming beneath the surface of life, how one reconciles the message of Jesus with the reality of war comes into acute focus. It’s not as easy as original sin or God’s mysterious plan. I am thankful it is not, and I am grateful to be here as a constant reminder of that truth.

I have never believed in a predetermined “plan of salvation” in which Jesus and all the rest of us are no more than pawns. Jesus was born in the perfectly normal way all human beings are born to perfectly normal parents. The angels, the magi, and the star in the sky came long afterward to establish the significance of the life of Jesus in light of his death. So why the stories? Those who knew him saw something powerful, something ultimately real about him. They struggled to make sense of his tragic and violent death through the symbols and stories of their times.

Here in combat, we too are engaged in the same struggle to find meaning in a world of violence and uncertainty. The simple fix—pray the sinner’s prayer, accept Jesus, and walk away—might be an easier way to deal with it all, but the questions of being and nothingness remain and will eat away at the edges of your spirit. No matter how you choose to run and hide from the reality of war, it will keep coming at you until you recognize that you are the only person who can give meaning to your own life.

If angels, magi, and roving stars did not accompany the birth of Jesus, then meaning lies not in a miraculous birth but in an exceptional life—a life that ended in betrayal, injustice, and violence. The birth, and therefore the life of Jesus, must remind us that, far from being complete, our lives and our world are fragmented and imperfect. Jesus saw this imperfect world and imperfect human beings not as utterly fallen, beyond redemption, or requiring the intervention of an otherworldly deity to make us into something we are not. He saw the world—just as it was and is—as God’s world. He saw human beings—just as we are—as God’s people. What mattered to him was how we respond to God’s imperfect world and God’s imperfect people.

Jesus taught us to respond to violence by turning the other cheek. He taught us to “love thy neighbor as thyself.” What happens when your “neighbor” is trying to kill you? You cannot turn the other cheek when you have a split-second to “take the shot” that may save your buddies’ lives. If you fire, how do you deal with the knowledge that you took the life of another human being? These questions are not your typical coffee hour discussion but issues I face on a regular basis. I can tell you that easy answers don’t cut it.

Thrown into this broken world, dreadful circumstances sometimes require us to do awful things. When this happens, the life of Christ requires that we turn to each other and see God’s people. The life of Christ beckons us to meet our fragmented selves with compassion—standing with, walking with, hoping with, and loving with our fellow human beings.

I believe, I hope, and I pray that I do these things every day, yet I cannot tell you how to do them. I cannot reach into my pocket and pull out my leather-bound red-letter edition of the Soldier’s Bible and point to the answer. In combat, honesty demands that we finally come clean with ourselves and admit that answers do not exist, only questions and only human responses to human frailty.

“Praetorian Base, this is Dark Horse 1-6. We are RP PSS1. Four Victors, eighteen Pax. We’ve got the chaplain for you.”

I haul myself up the dusty entry road and into the now cleaned up PSS. Dropping my gear, I look around at the scene. A new building stands there now, where debris and death were not so long ago. A young soldier sees me from a distance and quickens his step to greet me. I have not seen him since I sent his friend on his final ride home. He throws his arms around me; the embrace nearly takes my breath away with its power.

“Sir, I’m so glad you’re here. We missed you,” he says, with his arms still tight around me.

In that single moment, all my questions, all my fears, all my confusion faded away. I knew why I was here, why I do what I do, and what it means to live in a broken and fragmented world. There is nothing in the world I would have rather done that day than rumble down the dirty, ancient, dangerous streets of Kandahar City, building meaning in the midst of war.

This article appeared in the Summer 2013 issue of UU World (pages 16–18) and was excerpted with permission from War Zone Faith: An Army Chaplain’s Reflections from Afghanistan, © 2013 George Tyger (Skinner House Books). 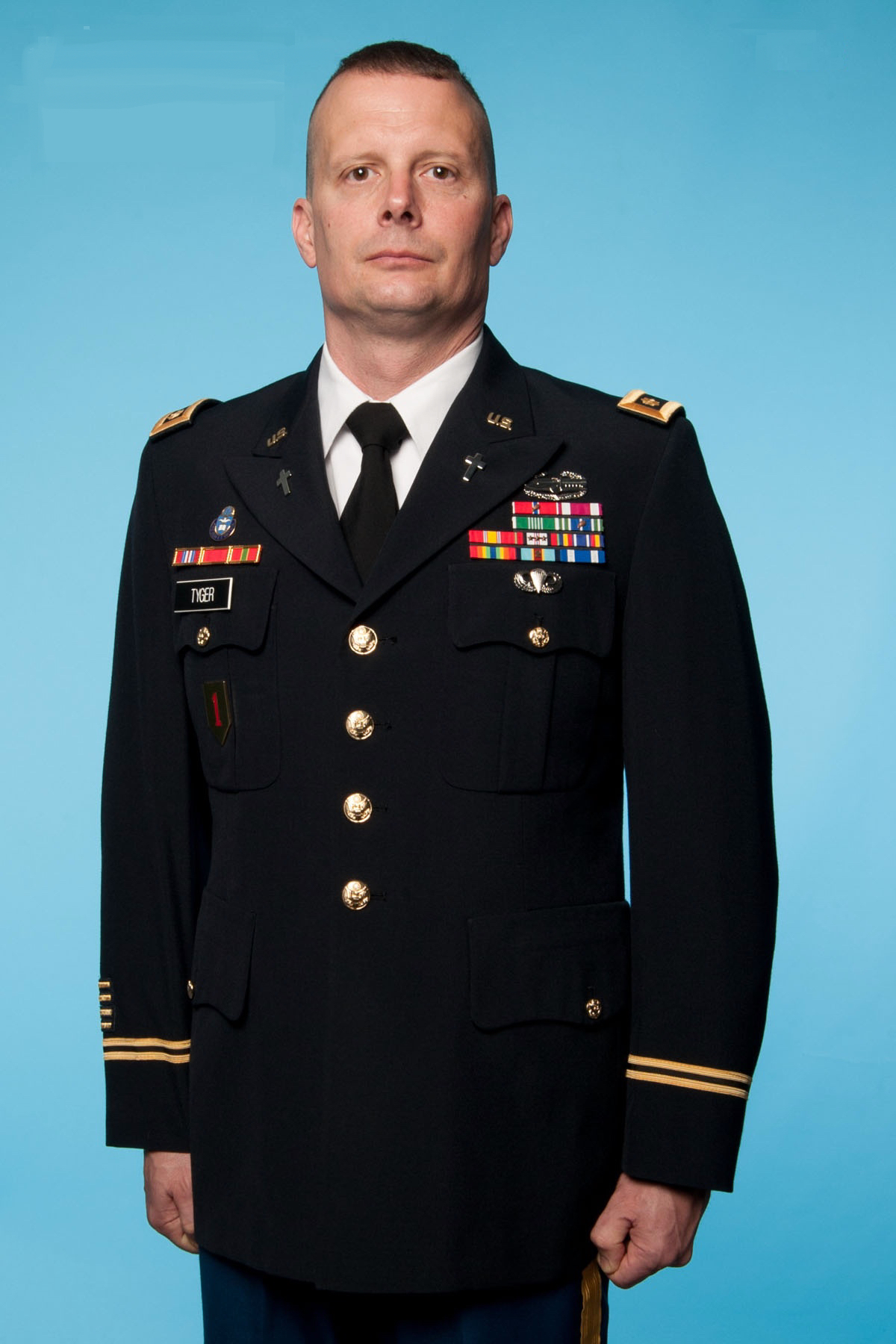 Putting holes in things that used to be solid is hard. Some days, there is broken glass everywhere. And not all of us are skilled with the metaphorical power tools.