Struggling up the mountain

The human response to places that open the spirit is deeper and older than any religion.

Paige Grant | 8/7/2006 | Summer 2006
Pilgrimages: Places that touch the spirit
Struggling up the mountain
Paige Grant
8/7/2006
UU World Magazine Summer 2006 , published by the Unitarian Universalist Association
Reflections
Personal Inspiration
I was trudging up Hermit Peak in northeastern New Mexico, my thumbs hooked in the straps of my backpack: deep breaths, slow regular steps, dark uniform woods. My companion was too distant for conversation, and besides, my lungs weren’t getting enough air to hike and talk at the same time. As often happens when I’m hiking, the rhythm of my breathing turned into a song in my head:

I met a wayworn traveler in tattered garments clad,
And struggling up the mountain, it seemed that he was sad.
His back was laden heavy, his race was almost run,
But he shouted loud, “Hosanna! Deliverance will come.”

The hymn caused my feet to lift more easily. I was amused that the song that had surfaced in my brain described me at that moment, in tattered garments, struggling up the mountain. I wasn’t sad, but my bent, laden posture might have looked that way. I felt an affinity to the pilgrim and the song’s chorus:

We broke out of the deep woods into an open meadow with long, long views. The slope became easier near the crest. On the other side, I knew, a trail marked with crosses led to the cave of the nineteenth-century healer for whom Hermit Mountain was named. We dropped our packs and flopped down in the fluttering shade of an aspen grove at the edge of the meadow. I was tired, sweaty, and deeply happy. Tears came. I thought, I am never so filled with joy as when my body has worked this hard. The weariness cleans out the usual chatter and leaves me open to be filled with this light, this beauty, this grace. I am a pilgrim, and I have received the blessing that pilgrims seek.

Traditional religions have found many ways to open the spirit: incense and ritual, chants and music, tranquil temples and majestic cathedrals. In their quest for contact with the holy, the faithful often undertake arduous travel—a pilgrimage—to places where the veil between the familiar and the spiritual worlds can be pulled aside for a moment. Those of us who cannot find reason or resonance in traditional forms of worship can still share the spiritual practice of pilgrimage. It’s the same grace, whether or not it’s the same god.

When I was in the Peace Corps in Nepal, I made the trek to Muktinath, a holy place to Hindus and Buddhists. When I told a friend from my village that I was going there, she interpreted my trip as a pilgrimage, not just an adventure. “Bring me some dubh!” she said, referring to the fragrant cedar that grows in the high country, to toss on the coals during a ceremony at home or at the temple. She told me of her own pilgrimage to that place, of the long, hard journey.

Off I went with three Peace Corps companions. On the last long climb to Muktinath, we walked in the company of pilgrims of every sort. When we arrived at our destination, we washed our hands and feet in icy water pouring through 108 spouts carved to look like the heads of cows, and filled tiny bottles for friends. We gazed out on the mountainsides and snow peaks. Then we began our return, past walls made of stones brought by travelers over hundreds of years and carved with Om mani padme hum, the Buddhist prayer of so many layered meanings; through Thakali villages with their flat roofs piled with firewood; back to the elevations where corn and bananas grow; and then, after a month of traveling, home to my village, where I gave my friend the fronds of incense cedar and a taste of the water from 108 cows’ mouths.

But I needn’t have traveled half a world away to find a traditional pilgrimage site. Near my home in Santa Fe, New Mexico, lies the village of Chimayo. The little chapel there, El Santuario, is almost 200 years old. It radiates the love and reverence of those whose hands raised its beams and pressed plaster onto its walls. Not a wall or a doorsill is level. Candles flicker, and the saints painted on the walls are simple, dark eyed, and still. Behind the altar is a small hole in the floor. From it, the devout take a pinch of dirt as they murmur their prayers. Those little dabs of soil wind up in plastic bags at the foot of santos in the kitchens of Catholic homes, or mixed into adobes in new houses, or dabbed onto the hands of dying grandmothers. The sanctuary’s anteroom is thick with crutches and canes cast away when prayers were answered, and notes of thanks are tacked to the walls.

Each year during Holy Week thousands of people line the roads north of Santa Fe on their way to the Santuario. Blisters and sore muscles are gladly accepted as part of their penance or gratitude for answered prayer. Spring weather in this high country can be unreliable, and travelers often huddle under overpasses waiting out sudden showers, or wrap themselves in trash bags as protection from wind and snow. Some carry crosses. Once I saw a lean young man in a jogging suit and Walkman, boogying along with a cross made of two-by-fours balanced on his shoulder. When the pilgrims reach the Santuario, many make simple crosses out of twigs or grass and tuck them into the chain-link fence around the chapel grounds, or twine dime-store rosaries into the leaves of a tree. I know something about the peace and joy they feel, having rendered themselves open to grace through their hard efforts.

Last year during Holy Week, my daughter and I were watching rainstorms alternate with shafts of sunlight in a stately dance over the canyonlands of southeastern Utah. The vista stretched a hundred miles across dissected rock layers, ranging from purply-chocolate, green and blue shales, to sheer red sandstone walls, with white belts and buff hats. An isthmus just twenty feet wide connected continental mesas. In other places, sky-island buttes had disengaged from their mother mesa. Occasionally we could glimpse a loop of sinuous river, the Colorado or the Green, snaking through the country thousands of feet below. We hiked to Upheaval Dome, a rock rose two miles across, with petals of Navajo sandstone, a heart of blue-green-gray Chinle shale, and a central spike of White Rim sandstone. The skyscape was even grander than the landscape, and fingers of rain linked the two.

Closer at hand, rocks had formed like shrines. Niches and crevices, phalluses and totem poles, Easter Island gods and priestly sentinels stood in rank and file atop sandstone walls pierced here and there with a window or a stone arch.

Thanks to a chatty geological guidebook, we could read the tectonic underpinnings of the landscape that go back more than a billion and a half years, full of the coming and going of oceans, the raising and leveling of mountains, the upwelling of salt bowing layers of rock above it. Deep time. As with starlight that is light-years old when it reaches our eyes, to view this beautiful landscape is to see into antiquity. Years before I had drifted in a canoe on the Green River under these same great bluffs, and a friend had said quietly, “I am very small, and I haven’t been alive very long.”

On our last hike in the canyonlands, Ariel and I set off to see Delicate Arch. We climbed along the buff-colored rock, shining in the rain, for most of an hour. The trail, marked by cairns, led up onto a stone shoulder. Suddenly, there was the famous free-standing arch, balanced on another shoulder of rock across from us. A young couple who had passed us on the way up gazed quietly in all directions above us. A man shot video footage of the very still rock, then volunteered to take a picture of Ariel and me in front of the arch with our camera. As we left, more people were coming up the rain-slicked rock.

What was this if not a pilgrimage? We go to places that touch our spirits. The more effort that is made in reaching the place, the deeper the sense of grace. But those of us who cannot use the forms of traditional religion may find we lack an appropriate response when our souls are filled to bursting with beauty. As we came to the edge at Grandview Point, I laughed, swallowed a lump in my throat, and then, at a loss for words and full of joy and awe that needed to go somewhere, I turned to Ariel and babbled, “Narajamoonabibble adiminskinaw! Nateemaskoo laflallee!” “You’re speaking in tongues,” she said. An adherent of the Less is More creed, Ariel was able to condense her reaction to “Wow.”

Religious folk confronting such natural wonders may whisper, “Ave Maria! Hare Ram! Allahu Akbar!”&mdash:and these forms express their feelings. But the human response to places that open the spirit by their beauty and grandeur is deeper and older than any religion we know. Religions grew up to assist with the tongue-tied emotion I felt at Grandview: they give us hymns and prayers. But as I reflected on what I had felt there, I’ve come to believe this is what lies at the heart of that honoring:

Glory be to Time
And to thy wife Water.
We praise thy servants Heat and Pressure,
And the miraculous attraction of molecule for molecule, mass for mass.
We who are light become life—oh, so briefly—
Look on your works, Ye Mighty, and despair,
Delight,
Are called to do you homage.

Face to face with immensity, may we gain perspective,
Gratitude for the gift of being witness,
And peace in knowing that our eyes will close,
Our energy and matter will mingle with the stuff with which you work,
World without end.
Amen. 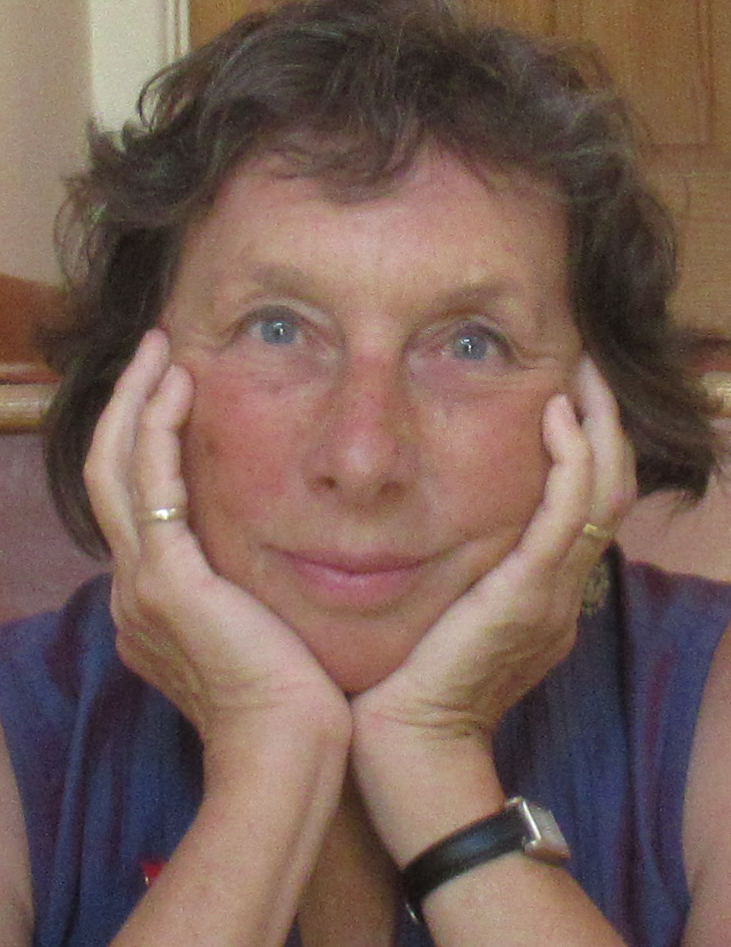 Paige Grant had a career as a hydrologist and environmental activist, mostly in Santa Fe, New Mexico. Nowadays, she farms, writes (onceuponapaige.com), works with a caregiving non-profit, and helps clean between guests at her family’s Airbnb.