Keith Ellison 8/23/2010 Fall 2010
There is enough
There is enough
Keith Ellison
8/23/2010
UU World Magazine Fall 2010 , published by the Unitarian Universalist Association
Reflections
Social Justice, UU Theology
I’m so pleased that the yellow Standing on the Side of Love shirts proclaim love not just as a fuzzy warm notion, but as an active principle engaged in informing us about how we live with each other, with our planet, with this economy, with the way we do business.

Love is a verb. It should be active. It should be specific. It’s not weak. Actually, it’s quite powerful. And it’s brave for you to have love on your chest, because some people will look at you and say, oh, love, you know, it’s just a sentimental notion. It’s not practical. It’s not realistic. For all those people who fight war after war after war and spend money, dollar after dollar after dollar, fighting these wars that never get us peace, I’m telling you, love is way more practical, way more realistic, way more economically sensible than any of these other principles that we bring to bear. Love is the way we should do business.

I want to recall a story from the Christian Bible. I’m a Muslim, but Jesus is a highly regarded spiritual vessel and prophet in my own faith.

Jesus was teaching to the multitudes one day, and it got along around dinnertime, and he turned to his helpers and said, you know, it’s getting to be around dinnertime, so what do we have for the folks to feed them? He turned to them and said, what have we got? They said, all we’ve got, man, is a couple of fish and some barley loaves.

And Jesus, he didn’t argue with them. He just started handing out food, and as the scripture goes, there was enough. There was enough. Now, I wasn’t there. I don’t know what happened. I mean, maybe the people noticed there wasn’t enough, so they went home to their villages and they got more food to share. Or maybe what happened is that the disciples’ perception of scarcity was misinformed and actually there was more than they understood there to be. Maybe there was abundance. Maybe there was radical abundance, though they saw scarcity.

I don’t know. But the scripture says that after the meal, there was not just enough. There was more than enough, and they had to pick up what was left over.

You know there may not be enough if we squander and waste what we have. There may not be enough if we devote all of our resources to war-making and killing and destruction. But there is enough, brothers and sisters, if we will embrace love. If we will embrace unity. If we will recognize the inherent and essential dignity of all living things, not just human beings, but our fellow natural life in this world as well.

And there is enough if you and I will commit ourselves and have a strength of spirit, not tough, not bad, but a strength of spirit based on our belief that love is the answer and that people who don’t quite see that, people who are operating on the basis of fear who think that it’s important to throw people away and throw people out and divide us, if you will be strong and brave enough to stand up against that philosophy, not against those people, but against the philosophy, because people can change, right?

Adapted from a speech given by Representative Keith Ellison to the UUA General Assembly on June 26, 2010. 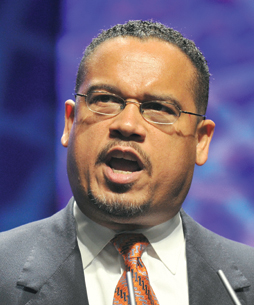 U.S. Rep. Keith Ellison, who represents Minnesota's 8th District, spoke at the Unitarian Universalist Association's (UUA’s) 2010 General Assembly. He is the first Muslim to be elected to the U.S. House of Representatives.

Some writers use words as weapons. Let's use them to connect and heal instead.