Our interconnectedness makes the powerless powerful, says a young UU activist in prison for interrupting an oil and gas lease auction.

‘It is very rare to sustain a movement in recognizable form without a spiritual basis of some kind,” the peace activist and Catholic priest Daniel Berrigan told author Chris Hedges. Having seen how my fellow members of First Unitarian Church of Salt Lake City and Unitarian Universalists elsewhere have embraced environmental justice as central to their religious lives, I’m sure Berrigan is right. And I’m convinced that the spiritually grounded activism of Unitarian Universalism holds the potential to not only make the progressive movement more principled, but also make it more pragmatic.

As Unitarian Universalists we believe that each of us is part of an interconnected web of life. This deep connectedness is a powerful motive for activists. Our connection to each other is both the reason why taking a principled stand against injustice is the right thing to do and the reason why it works. Activism makes no sense to those who believe that a person is an isolated individual. Without accepting the Rev. Dr. Martin Luther King Jr.’s assertion that “injustice anywhere is injustice everywhere,” no one would ever take a stand until they were personally affected. Oppressors have always tried to discourage “outside agitators” precisely because they’ve known that no real activism could survive when people stood up only for themselves.

I define activism as the actions of those who lack authority through the traditional power structure yet still believe that they can shape the society around them. Because activists by definition are at a disadvantage to their opponents, the effectiveness of activism is based on activists’ interconnectedness. Those who believe in the notion of an isolated individual usually refer to activists as naïve. It’s ridiculous to think that one isolated individual could possibly change massive institutions like corporations or governments. By its very nature, activism is an act of faith in our fellow human beings. The greater the risk and sacrifice involved in the activism, the greater the faith required in each other.

Part of the role of civil disobedience is that it awakens and enlarges that part of our souls that calls us to rise against injustice. Organizational analyst Margaret Wheatley, reflecting on the interconnected power of small actions in East Germany that led to the fall of the Berlin Wall, writes, “[E]ach small act of defiance or new way of being occurred within a whole fabric. Each small act was connected invisibly to all others.” Robert F. Kennedy expressed a similar sentiment about the “tiny ripples of hope” from a million actions sweeping down “the mightiest walls of oppression.” These statements invoke a deep spiritual connection that amplifies the power of our actions.

Those views of our interconnectedness mean that activism is not only justified and effective, but also morally required. If every small act of defiance reverberates within the whole fabric, then the same must be true for every small act of obedience. Cowardice invites just as many imitators as courage. If we believe that taking a courageous stand for justice has a deep spiritual resonance throughout humanity, then we must accept that cowering in the face of injustice has an impact just as profound. Every time we choose convenience over principle, we strengthen the status quo and reinforce the existing power structure. Every time we choose comfort over justice, we help build those walls of oppression. This means that we hold some degree of responsibility for the injustice around us.

Morally there are no sidelines in a struggle between oppressors and the oppressed. All that oppressors ask from the rest of us is to mind our own business, so by attempting neutrality we implicitly side with the oppressors. If we are truly an interconnected web, then we cannot simply blame the actions of the powerful for the injustice in our society; injustice is also the result of countless inactions by those with a responsibility to our fellow human beings.

This basic moral imperative to seek justice for others as well as for ourselves, while rarely discussed, is generally accepted by progressives. The real question is how we should best meet this ethical mandate. Oddly, the predominant answer for the past thirty years has been that we should answer this moral call without talking about morality. In recent decades the Left has mainly relied on logical arguments that appealed to tangible, selfish needs, as if they believed in the notion of the coldly rational “economic man.”

As a young activist, I often hear a common refrain from liberal baby boomers. After I talk about activism in terms of ethical principles, they say, “Oh, we were young and idealistic once, but then we realized that we had to be pragmatic and compromise.” I suspect that many young activists have heard this line, and I hope that it is just as perplexing for them as it is for me. The obvious analysis of this refrain is that baby boomers were young and idealistic in the 1960s and ’70s, when they ushered in one of the greatest cultural awakenings in the history of the country. The tangible results of this supposedly misguided idealism were the Great Society anti-poverty reforms, the Civil Rights Act, the Voting Rights Act, the Fair Housing Act, the Clean Water Act, the Clean Air Act, the Environmental Protection Agency, the Consumer Protection Act, voting rights for 18-year-olds, ending the draft, and ending the Vietnam War. Then they got pragmatic by the end of the ’70s, after which the country moved steadily to the extreme Right and many quality-of-life measures have gotten worse.

This brand of pragmatism is defined by compromise, an aversion to ethics, and a focus on political feasibility. The logic is that making political gains requires sacrificing principle and accepting what is politically feasible. For the past thirty years, while progressives have accepted what is politically feasible, the Right has focused on changing what’s politically feasible. The Left has been ordering off a menu written by the Right. To sway the public discourse, the Right has relied on emotional stories that appealed to principle. Since the Left stopped talking about morality or expressing a coherent worldview, there has only been one set of principles in the public discourse. Unfortunately, those principles boil down to something resembling John Galt’s oath in Ayn Rand’s novel Atlas Shrugged: “I swear—by my life and my love of it—that I will never live for the sake of another man, nor ask another man to live for mine.” Nothing could be further from the message and example of Jesus, or more destructive to a healthy society, but it has little competition as a worldview in our political discourse.

These strategic choices have created a struggle between logic from the Left and emotion from the Right, and emotion has consistently won. From climate deniers to the poor who fight for the right to be exploited by the rich, no assertion of facts has been able to persuade a decided heart. If we insist on staging a conflict between the head and the heart, the head will always lose. Fortunately, the choice between logic and emotion is a false dichotomy.

Emotion, morality, and principle can work in support of truth and logic rather than against them. Stories appealing to the heart can also open the mind to accept facts. We can inspire and arouse that deep spiritual part of our fellow citizens, with the added bonus that reality is actually on our side. This is the natural advantage for progressives. This is why the moral arc of the universe has bent toward justice over the long term. It’s important to remember that the last thirty years of regression have been a historical anomaly on the slow, rocky, and endless path to justice. We may lose by trying to pit the head against the heart, but we can be very powerful by seeking an alignment of the head and the heart.

Finally, we must realize that most progressive leaders cannot be counted on to initiate this vitally needed spiritually grounded activism. Despite the rhetoric about pragmatism, the fact-based strategy of relying on logic alone was never about effectiveness. It was about safety. After all, the defining characteristic of pragmatism is not compromise; it is winning. There is nothing logical or pragmatic about doing the same thing over and over when it consistently fails to advance our goals. The logic-centric strategy was chosen because it is comfortable for those who feel awkward about emotions and ethics. That is why progressive spiritual communities can be so important today. Those who have explored the deeper spiritual part of themselves, including UUs, can establish a spiritual basis for the pursuit of justice, in the process helping progressive leaders articulate the head-heart alignment.

Many of us came to the UU community with an aversion to any discussion of ethical principles that reeked of preaching. The rational nature of Unitarianism helped us feel safe while we satisfied our deep spiritual need for connection. We found that head-heart alignment. As we overcame our fear, we came to understand that, as W.H. Auden said, “A church is simply any association of people with a common need and engaged on a common task.” In that sense, America has never had a greater need for a progressive church. 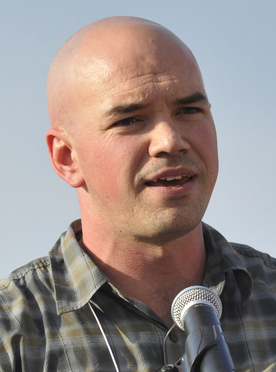 Tim DeChristopher, a member of First Unitarian Church of Salt Lake City, Utah, is the cofounder of Peaceful Uprising. He has been serving a two-year federal prison sentence for interfering with a government oil and gas lease auction in Utah in 2008. Upon his release to a halfway house as this issue was going to press, he will become First Unitarian Church’s director of social justice.

Do you have to be an activist to be a Unitarian Universalist?

Do you have to be an activist to be a Unitarian Universalist?

Six leaders reflect on activism and religious identity in a racially and politically charged era.