We raised our daughters as Unitarian Universalists. When Julia responded to the ancient richness of Judaism, I understood.

As I pushed the “send” button to order the tzitzis, I knew it was the strangest thing I would do all week. Make that all month.

Tzitzis are the fringes that, by Jewish law, must hang from the four corners of the prayer shawl called a tallis. I’m making the tallis for my daughter, who is studying to be a cantor in the Jewish faith. I’ll wrap this gift and place it under our family Christmas tree as part of my personal declaration of war on holiday commercialism.

“What do consumer electronics have to do with the birth of the Prince of Peace?” I asked my three daughters, and before they could answer, I told them that I would make, not buy, their presents this year: a quilt for Lucia, the youngest; a jacket for Leah, the middle daughter; and a tallis for Julia, a future cantor engaged to a future rabbi.

I come naturally to interfaith situations. In 1929, when my Catholic father married my Lutheran mother, their marriage was considered interfaith. Later my sister, who like me had been raised Catholic, married a Jew, and ten years later I married one, too. The last of my three sisters to marry was Linda, who had become a nun in 1957, left the convent in 1974, and at age 51 married a man who professed no religion at all but would be Hindu if he did. No one blinked.

When my parents married, my mother was required to promise that she would raise her children in the Roman Catholic Church. She did that with rigor, becoming a household enforcer of fasting, Mass attendance, and rosaries. After I was born, she herself had converted to Catholicism, finding spiritual sustenance in its prayers and rituals, attending novenas and observing Ember Days.

Despite my mother’s conversion from one faith to another—or maybe because of it—neither of my parents questioned my spouse’s religion when I married Joe Rubin. Joe’s family were secular Jews who expressed no qualms about our mixed faiths.

Joe and I met and fell in love in college, and when he and I were ready to introduce our own family to a spiritual home, we chose Unitarian Universalism. The denomination would respect the beliefs we brought to it and challenge us to build our own unique theologies. Unitarian Universalists aren’t tied to dogma, and after my years with Holy Mother Church, I was ready to open some windows and expose some of my old beliefs to the fresh air of rationality. Joe appreciated having a common spiritual ground for raising our children. He liked the sermons at our new religious home because their appeal to intellect rather than faith reminded him of the sermons of the Reform Jewish synagogues of his childhood.

We raised our three daughters as Unitarian Universalists, and when Julia, our oldest, responded to the ancient richness of Judaism, I understood. In our family home, we observed Christmas and Hanukkah, Easter and Passover, and so Julia knew all the stories of each holiday. In Sunday school at our Unitarian Universalist church, she was exposed to the philosophies of many faiths, including Judaism. And when Julia was in high school, many of her closest friends were Jewish, and in their homes she’d been exposed to the simple, prayerful rituals of Jewish family life, such as lighting the candles on Shabbat.

After high school, Julia spent her college years pursuing a degree in vocal performance from the New England Conservatory of Music in Boston. She graduated and found a job teaching music to very young children, but was still unsure of her professional path when she attended a Rosh Hashanah service at Boston’s Temple Israel a few months after graduation. There, she saw a woman cantor chanting Avinu Malkeinu, a High Holy Day prayer.

As Julia watched the cantor, the haunting beauty of the chant called to her, and she began to feel an awakening of the Jewish soul that had been with her since birth. She felt spiritually engaged in a way she had never been before, feeling a unique expression of God’s presence in the Hebrew and the ritual. Drawn to the music and its centrality to the service, she fell in love first with the cantorate, and through that, with Judaism.

I understood. The ancient music and prayers gave Julia the same visceral thrill of immanence and awe—that sacred feeling of divine presence—that Christian music such as Gregorian chant gives me. There’s not a lot of immanence and awe in the world these days, and so if someone wants to spend a life pursuing awe, and the stimuli that create it, that’s a worthy goal.

I’m gratified that my daughter felt called to a religious vocation. And didn’t she come by it naturally? My sister had been a nun for seventeen years. Religious vocations run in the family.

When Julia decided to study to become a cantor, she aimed her energies toward that goal with a committed intensity that was new to her personality. She signed up for Hebrew classes in the evenings, learning the shapes of the strange letters, reading from right to left, so that she could qualify for admission to Hebrew Union College, a training institution for rabbis and cantors in the Reform movement of the Jewish faith. Two years after her graduation from college, Julia qualified not only for admission to the school but for a scholarship as well.

In a spirit of deepening my understanding of Judaism and Jewish attitudes toward Christianity, one Friday evening as Julia was about to finish her second year of cantorial school, I walked to a synagogue in my neighborhood to hear a talk by its senior rabbi. The topic had been advertised in the local press as “What Jews Believe and Don’t Believe about Jesus.”

It was the Friday of Memorial Day weekend, a warm evening in May. The sermon was to be part of a regular Shabbat service. This was not my first Shabbat service—the Bar and Bat Mitzvahs of my nieces and nephews on Joe’s side of the family had assured a steady sequence of Friday and Saturday services in our religious practices. In the synagogue that evening, the opening of the Ark, the display of the Torah, the bowing, all reminded me of the sacred rituals of Catholicism. Jews revere their sacred scripture as embodied in the physical presence of the Torah, which is carried in great ceremony throughout the congregation in a ritual called hakafa. Catholics revere the sacred presence of God as embodied in the physical presence of a consecrated host. I see these commonalities.

Then came the sermon.

I had taken a notebook with me so I could write down what the rabbi said. His topic was important to me. He began by outlining the claims that, in his view, Christians made for Jesus that Jews can’t accept. He then outlined the Messianic prophecies that Jesus had not fulfilled. He ended by asking rhetorically, “Isn’t there still a lot we can learn from him?”

“Perhaps,” he answered. “After all, Jesus lived and died a Jew. He was an iconoclast and his ethical ideas were already in our rabbinic literature.”

“But we can’t divorce what we think of Jesus from a 2,000-year record of anti-Semitism,” the rabbi stated, calling on the church to “get out of the business of persecuting Jews,” and observing that Jesus has become a club that Christians use to beat Jews over the head.

“But if he inspires his followers to lead lives of compassion, that’s a Jesus we can respect,” he ended.

I walked home in the Friday twilight feeling chastened. As a Christian, I do not use Jesus as a club to beat Jews over the head. After all, my daughter Julia, my beloved firstborn, was now a Jew in her mind and heart. In fact, that’s why I had started making her a tallis a few months before. As I sat listening to the rabbi, it lay in my work basket at home, under construction but unfinished. This tallis was to become Julia’s gift for the coming Christmas, her holiday present in the year I’d vowed to avoid the commercial feeding frenzy.

Julia had asked for images of pomegranates for her tallis. Not only were they common and popular in Israel, where she spent the first year of her cantorial education, but also, according to Hebrew tradition, the red fruits have 613 seeds, corresponding to the 613 commandments of the Torah. I studied pictures of pomegranates and absorbed myself in the process of creating images of the red fruits in all phases of their development, from the bright blossoms called balaustines to the spherical ripe fruit with its crownlike calyx. I painted fabric, cut stencils, and studied photographs of tallitot (the plural of tallis) in order to fit my efforts to their aesthetic conventions.

As I worked I listened to a taped version of People of the Book, by Geraldine Brooks, the fictional story of an ancient Jewish prayer book and its survival through the Inquisition, two wars, and several book burnings. As I cut shimmering silk of green shot with blue for the stripes of the tallis, I listened to the story of the torture of a young converso—a Jew forced to convert to Christianity during the Spanish Inquisition. His crime: possession of a set of tefillin, Jewish ritual objects used in prayer.

As I measured and cut fabric and listened, the young converso was subjected to more than one torture for ownership of the tefillin, some before he was even told of his crime. The gruesome account gave my fingers a reverence and solemnity as I pinned the stripes in place. Of course I’d known about the Inquisition, the expulsion of Jews from Spain, the pogroms, and other violent acts of anti-Semitism throughout history, culminating in the horror of the Holocaust and continuing at times even to this day.

Of course I’d known about these dark days in history, but now, hearing a fictional first-person account of one of those dark times gave me an insight into the rabbi’s anger. Anyone with narratives like this playing constantly in his head was bound to take a dim view of Christian-Jewish relations. I could see I had a long way to go toward understanding the ancient religion to which my daughter had bound herself.

The sine qua non of a tallis is its long fringes of string—tzitzis—that extend from its four corners. By securing these strings to the corners of a tallis, its wearer observes the commandment in Numbers 15:38 that Jews “make themselves fringes on the corners of their garments throughout their generations.”

To make the tzitzis, I would have to pierce each corner of the tallis, draw a set of four cords through the hole, and then bind and knot them in a specifically prescribed way.

Of all the aspects of making the tallis, getting the tzitzis right worried me the most. I ordered them online from a purveyor of Jewish merchandise.

I told my husband about it at dinner that evening.

“Did you tell them you needed it in time for Christmas?” 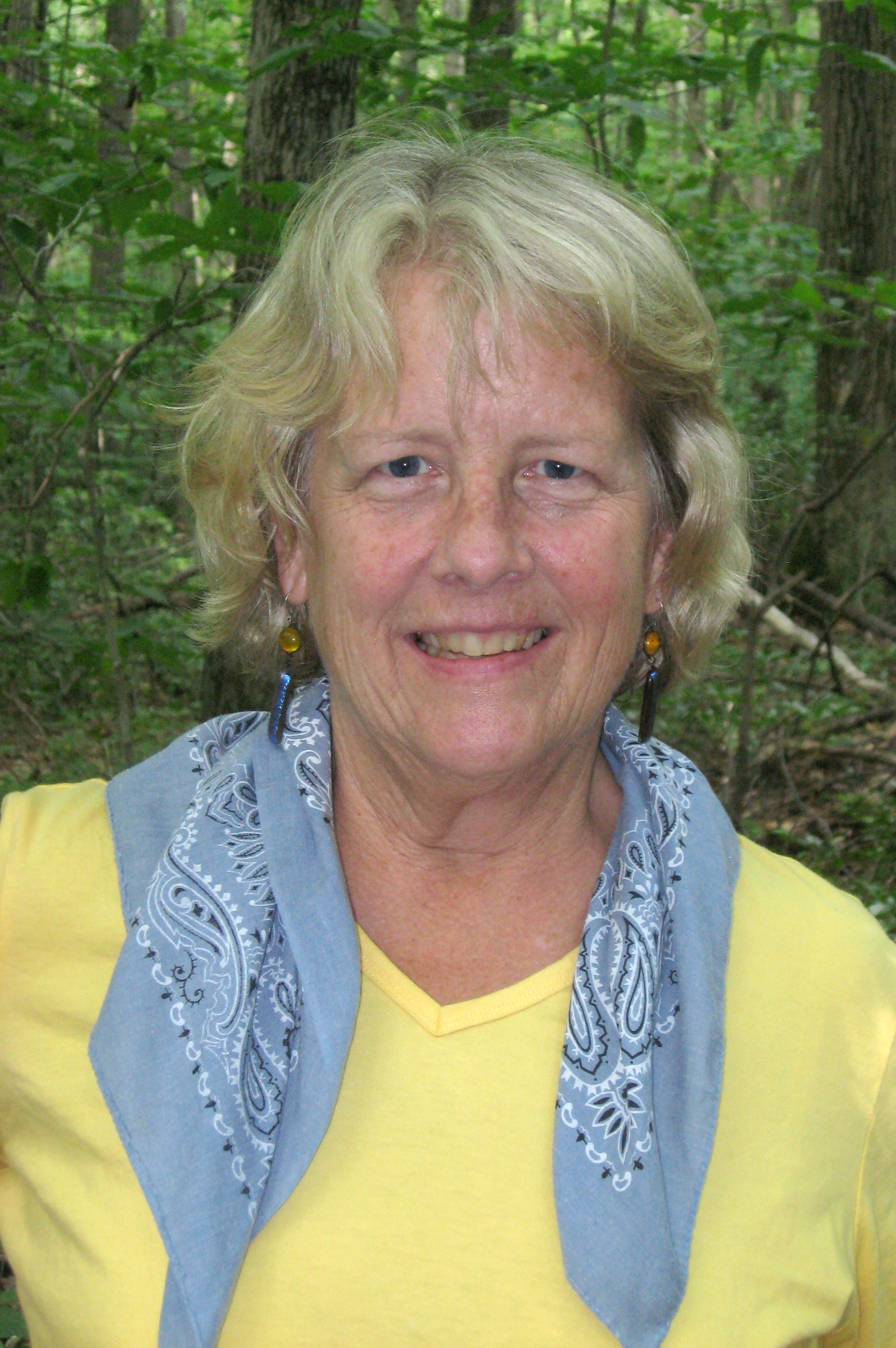 Diane Cadrain, an attorney who writes about employment law, is also an aspiring fiber artist and member of the Unitarian Society of Hartford, Connecticut.

What Unitarian Universalism looks like, twenty years from now.

Whether we realize it or not, we likely all know sex abuse victims and offenders. Can we be in community with both?