Committing to love and hope

A black UU and her mostly white church grow and change together, and challenge one another.

Over twenty years later, I still remember vividly the first Sunday I set foot in the church I now call home, First Parish in Brookline, Massachusetts. In the early 1990s I was a pulmonary fellow at Brigham and Women’s Hospital in Boston. On that Sunday morning I was post-call, having worked twenty-four consecutive hours in the intensive care unit at the hospital. I felt physically and emotionally exhausted.

While exploring my new neighborhood on the previous weekend, I had noted from reading the wayside pulpit that this was a UU church. This sparked a recollection of a service I had attended at a UU church in Chicago at the invitation of a fellow medical student. I recalled how welcome I had felt and how different the content of the service was from the Roman Catholic masses I was used to attending. The joyous energy and lack of dogma struck me most of all.

I wanted that experience again, so, though completely exhausted, I walked into Brookline UU. After church at coffee hour, I was warmly greeted by the (now former) music director, the Rev. John Ross, and by the wife of the minister at that time. Both became lifelong friends. The following Sunday I was invited to join “Women Spirit,” a group of women who explore spirituality from a feminine point of view. We meet monthly still. I felt I had found my spiritual home.

My twenty-four years at First Parish have been joyous—and often trying and exhausting. I found, as a black woman, signs of institutional racism and unchecked race-based assumptions. One member of the church told me how lucky I was that affirmative action was in place when I applied to medical school. As she was a female physician, it seemed not to occur to her that white women have also benefitted greatly from affirmative action.

Years later, I volunteered once to be on the finance council and the chair looked at me and asked accusatorily, “What do you know about finance?” It’s important to note that I have my medical degree from the University of Chicago, a master of business administration from the University of Illinois, and a master of public health from Harvard. Even if I didn’t, though, I suspect the finance chairperson would not have been so skeptical of a white man joining the finance council, whatever his credentials.

I was also asked by several parishioners to help integrate the church by inviting my friends to worship here. I know they didn’t think of this as hurtful. But it was. If they did not have friends of different races in their own circles that they could invite to church, how did they imagine I could singlehandedly make the church more “diverse”? I also felt many times I was subtly asked to change who I was to fit into this community of white liberals—from how I talk to how I engage in community—instead of us changing together so we all can bring our whole selves.

By now you are likely asking, “Why did she stay at First Parish in Brookline?” I continue to be there because eventually the tenor of the church changed. This congregation became willing to understand the issue of race and exploring white privilege. When I hug someone, I no longer feel them recoil—I get a hug back. This congregation changed as I changed.

I was able to divest of my distrust of white people as a group and give love as well as receive love. I had struggled with hatred and fear of whites because of the many instances of overt and covert racism I went through as a black woman in America. I was able to let go of that hatred and fear because of the love I found in this church. I was transformed as the congregation was transformed.

Many times I contemplated leaving Brookline UU for an African American church. My theology is here, though, in this faith—and the congregation’s willingness to address the uncomfortable issue of race made me glad I stayed. Seeing the current work of putting up the “Black Lives Matter” banner at First Parish makes me glad I am part of this community. My three years on the diversity committee, and our work on becoming a truly “beloved community,” have been healing for me.

I often see that we have a choice between submitting to pain and hurt or following love and hope. I’ve experienced both in my twenty-four years of Unitarian Universalism. Though it is not always easy, especially when it comes to racial (and racist) experiences, I commit and recommit to living out of love and hope. I commit and recommit to being a part of my congregation and this faith not because it is easy, but because it is home. 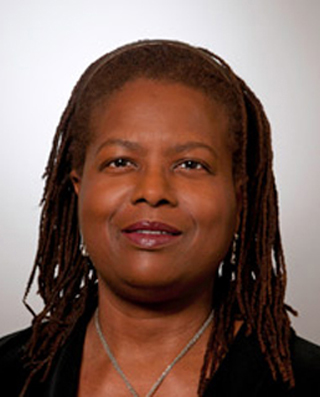 Dr. Michele David is a Haitian-born physician at Boston University Medical Center and a member of First Parish of Brookline, Massachusetts. David is a member of the Massachusetts Public Health Council, and also builds abstract designs recalling Haiti.