What I experienced in the rotunda of an Arkansas courthouse was an ethos of graciousness.

I’ve never been enamored of officiating weddings for people who know nothing about the congregation I serve nor about Unitarian Universalism, but who like the look of our building and grounds and are under the impression that UU ministers will marry anybody. I told the board of the UU Church of Little Rock and its Ministry Committee that I would be saying no to requests for weddings from couples who had no relationship to our church. It is true that, when I have been able to do such weddings in the past, doing so has given people a favorable impression of Unitarian Universalism, but I felt my time serving the UU Church of Little Rock would be better spent on strengthening it as an institution and caring for its members and friends.

After a circuit court ruling on Friday, May 9, struck down Arkansas’s ban on same-sex marriage, I knew I had to reverse my marriage decision. To be sure that the congregation knew, I talked with the church administrator and the website manager, who then gladly sent out this announcement:

In light of the recent decision by Judge Chris Piazza of the 6th Circuit Court that the ban on gay marriage in Arkansas is unconstitutional, gay couples were able to obtain marriage licenses for the first time in Eureka Springs on Saturday morning, where 15 marriages were performed. In anticipation of couples in Pulaski County seeking licenses on Monday morning, our Rev. Jennie will be going to the County Courthouse tomorrow to be available to perform marriages for gay couples. She feels this is an historic event in Arkansas and wishes to be part of this joyful occasion.

Judge Piazza (bless his heart!) discerned that Arkansas’s previous prohibitions on same-sex marriage were wrong, just as the prohibitions against inter-racial marriage were wrong. He felt deeply that they needed to be reversed. The end of his ruling is exquisite: “It has been over forty years since Mildred Loving was given the right to marry the person of her choice. The hatred and fears have long since vanished and she and her husband lived full lives together; so it will be for the same-sex couples. It is time to let that beacon of freedom shine brighter on all our brothers and sisters. We will be stronger for it.”

So Sunday night I drove to the church to create a sample same-gender wedding ceremony and print it out, and I picked up everything I thought I’d need, including my credentials to legally officiate marriages in Arkansas. Then I called my colleague, the Rev. Dr. Cynthia Landrum, in Jackson, Mich. A similar scenario has recently occurred in her state (see “Michigan UU Ministers Marry 200 Same-sex Couples”), and she rose to the occasion. I told her what I had amassed to bring with me and asked her if I’d forgotten anything. “An ink pen,” she added, helpfully. “Got it,” I said, “I have two!”

I did not know how many couples would be there in the morning. The news articles said there would be long lines of people. Cindy said that I might have to do several ceremonies at once, inserting the couples’ names, then sign the licenses all in a row, then do several more ceremonies. I prefer not to do weddings that way, but I was prepared to do whatever would be most helpful. As it was, after a couple of hours on Monday, we heard that Judge Piazza refused to stay his decision, so we had all day for the officiating and recording of same-sex marriages.

The atmosphere was boisterous, celebratory, and amiable. People with official-looking clipboards gave me a nametag that said “Officiant.” For the first several hours, there were at least fifteen officiants in addition to me. We did not have to do “mass weddings”; we were able to give each couple personal attention. Some officiants were clergy, and some were lay people. I felt that all of us were committed to giving the couples the right to be married that they should have had a long time ago. There were writers and photographers from the media all around us, respectfully asking if they could publish our names and pictures.

And there were many volunteers and people who had come to cheer us on, offering to take pictures or record the ceremonies on the couples’ phones. Many of them had nametags that said, “I’m an Ally—Free Hugs!” This meant a lot to me because I have been trained to advocate for gay rights, empowered to do so, I would even say charged to do so. But the allies, friends, and family were there because of their deep personal commitment, without any official role to bolster them on. I heard several people say that they have been fighting for this cause for at least 25 years.

Throughout the day, we all kept spontaneously crying at the realization of the magnitude of the right of gay people to marry in the state of Arkansas. But the fact that Arkansas is the first Bible Belt state to have legal same-sex marriages does not surprise me. I have found the people of this state to be Christian in the broadest and best sense of the word.

When I moved here in July (from Indiana and, before that, from New England) every time I turned around, people were feeding me—delicious food, rich conversation, warm fellowship. People here notice when someone is in need and do what they can to help, to share what they have, to even the playing field. They give people rides, provide home hospitality, and lend a caring ear. So I was not surprised that what I experienced in the rotunda of the courthouse was an ethos of graciousness. Why on earth shouldn’t gay people be given the same rights of marriage that heterosexual people have?

I officiated twelve same-sex weddings. Each couple was unique, and very nice and appreciative. All of them wept. For the sample ceremony I brought with me, I cut out most of the extra words, knowing people would want the briefest of weddings, so they could be recorded before a stay was announced.

So what are the essential parts of a wedding when you boil it down? Certainly not the frills and party favors and fancy attire. The couples looked like their most real and comfortable selves, and many came to the courthouse on a break in their workday. I said some opening words by way of blessing, including that marriage takes patience and courage. And we took time for the vows, including, “for better, for worse,” and “so long as we both shall live.” Some couples exchanged rings, some did not. I said a prayer for each of them. Then a pronouncement, a benediction, the kiss, and the presentation of the newly married couple.

Eight of the couples were women, four of them, men. Two were African American. One drove from Oklahoma. But most of them were from right here in Little Rock. What was the same about all of them is that marriage is really important to them—important enough to walk into a room full of strangers, several of them with no attendants, worrying that there might be hate-filled protesters blocking their way (for the record, there was only one, and he was shooed away quite early in the day), and risk asking, “Is there someone who will help marry us?” The day has dawned that the majority is saying, “We do.”

I am grateful that today, I have the influence, credentials, and backing to spend a day at the courthouse of a capital city legalizing same-sex marriages. I am most grateful to the UU Church of Little Rock for having the resources, decision-making processes, and wherewithal to have brought me here. They were glad and proud about what I did at the courthouse, and so were the many other people who sent me texts, cheering on me and my couples. There are moments in time when we must dare to claim our agency to be a vehicle for what is true and fair and gracious. Alfred North Whitehead said that that agency is divinely endowed to all people. But it is up to all of us to recognize those moments of kairos and to bravely engage with each other, with systems of power, and with God. 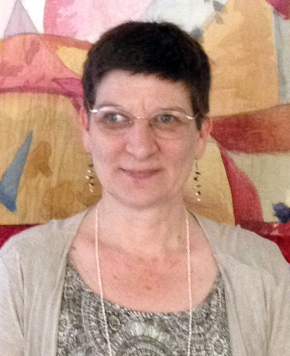 The Rev. Jennie Barrington performs some of the first legal same-sex marriages in the Deep South.