The lesson of Clive

I am a rock person; my husband is a cloud person.

Kelly Wigmore | 2/11/2013 | Winter 2012
The lesson of Clive
The lesson of Clive
Kelly Wigmore
2/11/2013
UU World Magazine Winter 2012 , published by the Unitarian Universalist Association
Life
Families & Faith Development, Personal Inspiration
I am a rock person and my husband Will is a cloud person. These are classifications that I invented, but you’ll recognize the kind of people they represent. It will also be apparent how superior I once thought rocks were in comparison to clouds.

Rock people make lists and keep to schedules. You can count on them to do what they say they’ll do. They are practical and “salt of the earth” types. They know where to find vacuum cleaner bags, last year’s tax return, and pipe cleaners for art projects.

Cloud people are creative and unpredictable. While charming, they leave a trail of notebooks and sweaters and reading glasses where they’ve traveled. They do things when it occurs to them and shop impulsively.

Rocks and clouds often meet, marry, and—after realizing they drive each other crazy—spend years trying to fix their partners. Add children and there can be an underlying current of dual superiority as each person parents in the rock or cloud style and, with head-shaking disbelief, watches what their partner does.

I would come home from an evening meeting on a school night and find Will and the girls inside a tent he’d erected in the family room, singing camp songs by flashlight. “How fun; did they finish their homework?” I’d think, as I grimly shooed daughters to bed and picked up dirty clothes and dishes.

As a determined rock, I was sure that lists and schedules were the best for our daughters. They knew what to expect, they saw how to break a large project into manageable steps, and they could always find clean socks in their top drawers. I knew Will was a great guy and a wonderful dad, but considered myself the chief and best parent.

I say this now with humility and great embarrassment because there came a day when I learned my lesson, when the family’s rock became gravel as the cloud parent proved his mettle. On one ordinary day, Holly, aged ten, asked me to hand her Clive, her beloved new guinea pig from the Humane Society. Will was reading in the recliner nearby.

I took Clive from his cage and gave him to Holly. They spent fifteen minutes together on the sofa, and then she asked me to put him back. She didn’t like the scratchy toenails of a nervous guinea pig, which is why I was the pig transporter. Holly watched as I returned Clive to his cage. Seconds after I put him—gently, I swear—in the cedar chips, he had a seizure and died.

Holly was horrified and began to shriek and cry. My brain went into overdrive planning: giving a little talk about how death is unexpected but a normal part of life, going to the pet store to get a new guinea pig as soon as possible, calling to complain to the Humane Society, having a pet funeral and letting Holly choose the music. And then Will spoke.

“Holly, come here, honey. Kelly, bring me Clive.” Weeping and frightened, Holly went to her dad, who cuddled her in the recliner. I gave him the limp guinea pig’s body, which he cradled in his hands on Holly’s lap. He led her in petting Clive with him while he held them both. I shut up and watched in awe.

“Holly,” he told her gently and seriously, “Clive had a very good life. He was glad that he got to come to our house because you took good care of him and loved him. He must have had a sickness we couldn’t see, so there is nothing we could have done. Clive’s last memory is of you playing with him and petting him, and that made him happy at the end. I know you’re sad and will miss him for a long time.”

The three of them sat quietly together in the chair until Holly was just snuffling. Then, she and her father found a shoebox and took Clive out to the garden to bury him. I went along, but mostly as an observer. That was a day when I saw that Will had a spiritual nature and an inspired touch that I would never achieve.

I realized that day that a busy mind sometimes needs to be still and let the heart and soul take over. It is their spaciness and spontaneity that lets clouds trump rocks at times. How nice, though, when there’s a rock there to make sure everyone takes baths and makes it to dental appointments. Best yet, if the rock and the cloud can appreciate one another’s gifts and work together in raising a family. 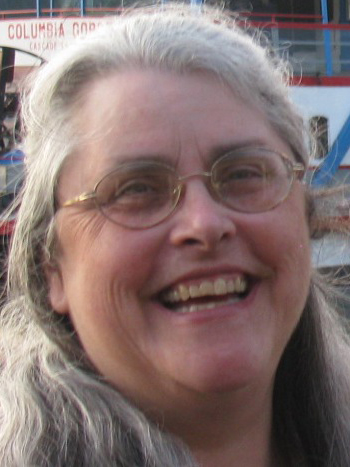 Kelly Wigmore is a retired middle school English teacher and a member of Atkinson Memorial Church in Oregon City, Oregon, where she has been involved in leadership, music, and religious education for eleven years.