Wandering in the wilderness

Personal feelings of being in the wilderness can help us tap into a collective force that evidences grace.

Inherent in the narrative of wandering is a sense of disconnection, yet paradoxically, when we place ourselves within it we feel less alone. When we become part of something larger, identifying with an ancient story, we are no longer free-floating nanospecks in an uncaring universe. We are players in an epic drama. Conceiving myself as a wanderer in the wilderness invited me to seek meaning in a trying time.

What I came to discover, as did the ancient Israelites, is that the wilderness provides a container—not a warm fuzzy one, but a container nonetheless—for a set of experiences that have the potential to inform the rest.

There’s a scene in the story of the ancient Israelites as told in the book of Numbers (the name of which in Hebrew is Bimidbar, which means “in the wilderness”) where the congregation, as it is called, is fed up. They cry out to God in their woe: “Why have you brought us up out of Egypt, to bring us to this wretched place? It is no place for grain, or figs, or vines, or pomegranates; and there is no water to drink.” (20:5)

How many of us have been there—crying out, “Enough is enough” or in the case of deprivation, “Not enough is not enough”? I suspect most of us know the feeling of being asked to carry more than we can. We look around and instead of seeing the normal plentitude we glimpse only empty stores: no figs, no grain, no pomegranates. Not even water.

It’s at this moment in our own internal wilderness that we are invited to relate to the billion fellow human beings who actually don’t have clean water to drink: to realize our interior landscape is an external reality for one out of six people on earth. It is hard to feel alone in that kind of company. But because alienation makes it hard to feel the presence of others even when they are right beside us, we too cry out.

In the book of Numbers, God tells Moses and his brother Aaron to “assemble the congregation and command the rock to yield its water.” What’s instructive here is that neither God nor Moses, neither Aaron nor the rock alone yields water: The water springs as the result of combined stirrings.

If in the wilderness we can attune ourselves to the combined stirrings, if we can hear our voice as one among many, feel in our yearning the pull of each being who longs to survive, we can tap into a collective force that summons humility and evidences grace.

What befalls us and what is bestowed upon us arrives on a wind not of our own making, but how we receive it—whether we welcome it, deny it, or diminish it—is ours to choose. In our pain we are not always relieved, but the wilderness teaches that we are accompanied, if not by the ones we expect, then by the ones who also know the dimensions of loss and the scale of despair.

In a much milder version of wandering, far from those ancient deserts, I have learned the usefulness of time in the wilderness; the way it tests us, not so that we earn favor or lose it, but so that we refasten ourselves to what matters, reconnect ourselves to what sustains us, and re-member ourselves to the universe that always holds us.

We may wander but we are not lost. 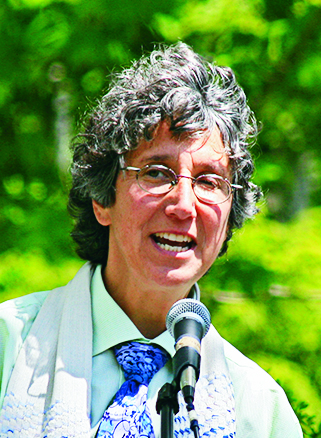 The Rev. Leaf Seligman is the minister of First Parish Church Unitarian Universalist of Fitchburg, Massachusetts, and the author of Opening the Window: Sabbath Meditations (Bauhan Publishing, 2011).