Was Thomas Jefferson really one of us?

What do we mean when we claim a historic figure as ‘one of us,’ anyway?

For me, there’s a certain irony when ever I sing “My Country, ’Tis of Thee,” and reach the line, “land where my fathers died,” although there shouldn’t be any irony whatsoever: This is my country. This is the land where I was born, and where my father died.

The irony is that strangers tend to assume otherwise when they meet me. When I am asked, “Where are you from?,” the interrogators aren’t happy if I answer “Texas,” which is where I was born, or “Nashville,” where I live now. All too often, I get what I call The Look. The Look says, “You know what I meant: Where were your parents from? What is your ancestry? What is your nationality?”

My husband wasn’t born in this country, and neither was his father—but they both happen to be white, so neither of them is asked where they’re really from—or when they’re “going back.” Do I resent that? Yes, I do. Does it bother me, feeling resentful? Yes, it does. I wish it didn’t bother me when people inform me that I speak English really well. I wish I could feel more gracious toward friendly strangers greeting me in Mandarin or Japanese. It feels terrible when people are disappointed in me because I don’t know how to help them with their origami or tai chi. Like many Asian Americans of my generation, I dread being asked where I’m from. It feels like being plunked into a pigeonhole bearing very little relation to my life or my personality. If someone truly wants to know where I’m coming from—what I believe, where I work, what I read, what I cook—asking questions based on my facial features won’t get them very far.

I am Asian, and I’m also American, but, as with so many other labels, those two little words—“Asian” and “American”—are far too small for the categories they supposedly represent. Whenever I hear a politician use the phrase “the American people,” I can’t help wondering, “Which ‘American people’? The Republican American people? The Democratic American people? The American people descended from the Mayflower pilgrims?” And if I were to shout back, “Not this American!,” would my dismay be dismissed with the phrase, “But you’re different!”—even though I have been a citizen of this country all of my life?

Consequently, I’m fairly cynical about how the word “us” is used. When we Unitarian Universalists ask whether Thomas Jefferson, for example, was really one of “us,” I want to know what “us” means when we’re defining people as Unitarians, Universalists, or Unitarian Universalists. Is it anyone who’s signed a membership book? Is it anyone who rejects the concept of the Trinity? Is it everyone who endorses the notion of multiple paths to salvation? Is it someone who believes in neither God nor heaven but embodies the saying “deeds, not creeds” by showing up to every potluck and rally?

It’s tempting to say, “Yes! All of the above.” We’re so much about being inclusive, and our religion does answer many people’s needs and prayers. UU leaders sometimes talk about growth as reaching out to “folks who are already UUs and just don’t know it yet.” Perhaps it’s unnecessary and even unkind to attempt defining who’s Unitarian and/or Universalist. Why not count everybody in, whether they sign a book or not?

But does everybody want to be counted? There are people who have attended my church for years who have not signed the membership book—on principle. They pledge time and money just like the official members do, but it matters very much to some of them that they remain independent of any religious affiliation no matter how loosely organized or creedless it may appear to be. There are people who come to our services who remain members of another church—who show up now and then to support their spouses or children, or they just like the music. And there are people completely in agreement with all Seven Principles who regularly stay away because they don’t like getting up early on Sundays or they don’t like church.

Yet it’s all too easy to find the equivalent of this practice in the lists of Famous Unitarian Universalists that many congregations feature on their Web sites and in their brochures. It’s fascinating how we invoke famous people in UU rhetoric. They seem to prove how influential Unitarian Universalists are, to show that we’ve been around a long time and that we aren’t just some freaky new cult or fancy tax dodge.

The lists can be good conversational tools: It’s easier to talk about role models than abstract principles. There are many to revere: Frank Lloyd Wright grew up in a Unitarian family and designed a UU temple (Oak Park, Illinois) and a Unitarian meetinghouse (Madison, Wisconsin). The Joy of Cooking had its genesis in a handout Irma Rombauer pulled together for the First Unitarian Church Women’s Alliance in St. Louis. Clara Barton was raised Universalist and wrote about it being “a belief in which all who are privileged to possess it rejoice.”

But John Milton? John Locke? They were religious radicals, to be sure, but anti-Trinitarianism does not automatically equal Unitarianism. The lists sometimes include virtually anyone who’s ever stepped into a Unitarian church or expressed a Universalist thought, as well as problematic assertions about how many Unitarians signed the Declaration of Independence and other feats of faith and intellect. To be fair, many of our forebears weren’t at all clearcut about their religious allegiances. Charles Darwin’s mother, day-school, and wife were all Unitarian, but he was baptized and buried an Anglican, studied for the priesthood, and later considered himself best described as an agnostic. Susan B. Anthony identified as a Quaker all of her life, but also attended services at the First Unitarian Church of Rochester for over fifty years. Thomas Paine was the son of a Quaker and an Anglican, but was he a deist or an atheist? It depends on whose propaganda you’re reading; his critics liked to call him a Unitarian, but he himself had very little use for organized religion.

The evidence is just as inconclusive when it comes to counting how many presidents of the United States we can claim. Four? Five? Seven? Abraham Lincoln sometimes gets mentioned as having Universalist leanings. James Madison appears on some lists as a Unitarian and on others as a Universalist, but he is usually regarded as a liberal Episcopalian. John Adams, John Quincy Adams, Millard Fillmore, and William Howard Taft were all indisputably members of Unitarian congregations—but it’s still not so simple when you look at their individual cases: John Quincy Adams was extremely critical of the Unitarianism of his day and sometimes wanted no part of it, preferring Calvinist and Trinitarian interpretations of the Bible. Fillmore rented a pew for years in the Buffalo Unitarian church, but he also wrote, “I am not a member of the Unitarian church.” Taft was a lifelong Unitarian but his wife and son were not. Technically speaking, even John Adams wasn’t a “lifelong” Unitarian because the First Parish Church of Quincy was Congregational until he was 15.

And what about Thomas Jefferson? The consensus seems to be that he had strong Unitarian sympathies but did not formally belong to any Unitarian church. There have been acres of sermons, articles, and books written on whether Jefferson thought of himself as a Unitarian. Those who prefer to regard Jefferson as an independent deist tend to highlight the letter where he says, “I am of a sect by myself, as far as I know.” Those who want to hold him up as a UU role model point to another letter where he says, “The population of my neighborhood is too slender, and is too much divided into other sects to maintain any one preacher well. I must therefore be contented with being a Unitarian by myself.” Jefferson was a regular donor to St. Anne’s Episcopal Church in Charlottesville, Virginia, and served on its vestry, but he was also known to worship at Joseph Priestley’s Unitarian church in Philadelphia.

With Jefferson, there’s yet another wrinkle, which is whether Unitarian Universalists really want to claim him at all. Eleven years ago [in 1993], at the UUA’s General Assembly, a group led by African-American UU ministers expressed outrage at plans to commemorate Thomas Jefferson’s 250th birthday. They asserted that “Thomas Jefferson’s role in the racial history of the United States is not one which African Americans, native Americans, or others victimized by the ‘founding fathers’ wish to honor.”

It turned out that this was not an isolated complaint from a politically correct fringe. There had been UUs quietly upset for decades over Jefferson’s exalted spot in the UU pantheon. One result of the protest was four years of passionate debate over whether the name of the UUA’s Thomas Jefferson District ought to be changed. The final vote was 75 to 51 in favor of dropping the name—short of the two-thirds majority required to enact the change. For the time being, it’s still the Thomas Jefferson District. Some UUs have no idea that there was ever a controversy, some people still don’t get what the fuss was about, and others wince every time they hear or see the district name. [Update: The district assembly finally approved changing the name in 2011.]

So many labels can be pinned onto Jefferson: hero, statesman, genius; slaveowner, racist, sinner; enlightened, tradition-bound. To call him by any single one of these is to leave out crucial parts of the story. To call him a Unitarian or a Universalist doesn’t really give us a true handle on what he believed—which goes for all of the other Founding Fathers and celebrities on the lists of Famous UUs, regardless of whether they were official UUs or UUs by association or “UUs-at-heart.”

The words “Unitarian” and “Universalist” are no more adequate than “Asian” and “American” when it comes to describing you, me, each other, or our ancestors. At best, the words are hints; they are not definitions. To use them carelessly—to be content with superficial assumptions and summary categorizations—cheats us of both the heartening and heartrending complexities of our truths.

From a sermon delivered at the First Unitarian Universalist Church of Nashville, Tennessee, in 2004. 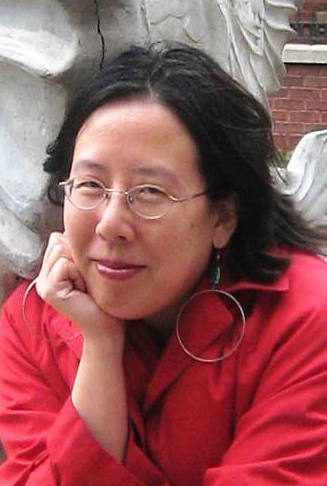 Peg Duthie, a member of First Unitarian Universalist Church of Nashville, Tennessee, is the author of Measured Extravagance (2012). She writes at Nash Panache.