'Willing to be changed by what we've started'

Universalism resonates with people of all races, but our churches do not. Yet.

We will only achieve the future of Unitarian Universalism if we—like the “young, growing God” in Brian Wren’s hymn “Bring Many Names”—are “willing to be changed by what we’ve started.”

What, exactly, have we started? In 1992, the Unitarian Universalist Association began a journey we call a “Journey toward Wholeness,” fueled by a vision of an antiracist, multiracial, multicultural Unitarian Universalism. We’ve had our stumbles and our false starts, but now, almost twenty years later, we’re on our way. President Peter Morales has said repeatedly that for us to be the religion for our time—the religion that can minister to an increasingly multiracial, multicultural America—we must continue this journey. The question is no longer “Should we be on the journey?” or “Do we have the right map or hiking gear?” The real question is “Are we willing to be changed by what we’ve started?” Because what we’ve begun will require tremendous change within Unitarian Universalism, at both the institutional and personal level.

Recent surveys show that nationally, 11 percent of UUs are non-white. At All Souls Church, Unitarian, in Washington, D.C., on the other hand, people of color make up more than a quarter of our congregation. We’ve still got a long way to go, but we’ve made some progress, and as pastor of one of our more racially diverse congregations, I’d like to share with you some of the ways we’ve been willing to be changed by what we’ve started.

Put the vision at the center and measure your progress. At All Souls, our mission to build Beloved Community is shared every Sunday in worship. We keep statistics to measure how we’re doing. Every member who joins fills out a detailed demographic survey. You’d be surprised, when you ask them, of the hidden diversity in your congregation. We are more diverse than we think, if we allow people to share that with us.

With whom are you in relationship and solidarity? We won’t take on a social justice issue that does not draw us into relationship with communities of color. Our marquee social justice programs now include teaching ESL, rebuilding New Orleans, and building affordable housing in the church’s neighborhood, all done in solidarity with communities of color. When we take on issues that aren’t traditionally considered “people of color” issues, we make sure that we build diverse coalitions. So, for instance, when we led the religious coalition for marriage equality in D.C., my co-chairs in that struggle were two heterosexual African-American Baptist ministers from a predominantly black neighborhood. Together we built the most diverse clergy coalition for marriage equality in the Union.

Who’s on your staff? To build multiracial multicultural churches, we must have multiracial multicultural staffs. We don’t have large staffs, so every decision counts and says something about who we are and want to be. Sometimes you need to think outside the box. For example, All Souls recently called as our associate minister an African-American United Church of Christ minister who grew up a Baptist just a few blocks from All Souls. Right now, D.C. is a city divided between older, African-American residents and younger, white transplants. The Rev. Dr. Susan Newman and I represent each side of that so-called “divide.” We are not supposed to be the ministers of the same church. The fact that we are means that we are willing to be changed by what we’ve started.

Who’s up front in the pulpit? When folks walk into church on Sunday mornings they look around and ask, “Are these my people?” “Do I see myself here?” It makes a big difference who’s on the chancel and in the pulpit. At All Souls we’ve called for a moratorium on what we call “Vanilla Sundays”: It’s against the rules to have a Sunday when only white people speak from the chancel.

What are you singing? And how? Music is crucial to our congregational culture. Your culture won’t change if your music doesn’t. Draw together a music team that is musically multilingual. At All Souls we have a venerable organ, and so we have organ music. But right next to the organ is the drum set, and so we have percussion just about every Sunday, too. Forty-five percent of our congregation is under the age of 40, and I chalk that up to a vibrant, joyous, and diverse music program.

What stories are you telling? What readings are you sharing? We audit every worship service to ask ourselves from which cultures and traditions the wisdom is coming. Whose stories are being told? I ask myself as a preacher, “Am I writing a sermon that will only appeal to people like me?”

This isn’t rocket science. It is, however, difficult, and we must be intentional.

I often hear people say that we’ll never become more multiracial or multicultural because our theology does not appeal to people of color. I believe this is a lie that we perpetuate to keep ourselves from having to change. Pentecostal Bishop Carlton Pearson gets invited all over the country to preach the gospel of Universalism to largely African-American audiences. When he spoke in my church, he told me he believes that Universalism will be to the twenty-first century what evangelical Christianity was to the twentieth—the next growth movement. “You’ve got the theology,” he said to me. “It’s the vision you don’t have. You can’t imagine Unitarian Universal­ism as anything but a movement of white New Englanders.”

One of our greatest assets is our gospel—the gospel of Universalism, of God’s love for all people. I serve a church called All Souls, which kind of says it all. Those two words sum up all that is good and holy and true about religion. Can you imagine a church that called itself “Some Souls Church”? But isn’t that the de facto name of the dominant religious culture in America? The religious right worships a God of some souls, a God who plays favorites, a God who picks and chooses.

The good news that we Unitarian Universalists have to share—the good news that Bishop Pearson is sharing—is that a God who picks and chooses is no God at all. It is an idol. Against this spurious faith we must preach the old Universalist gospel of a love that invites all souls to the welcome table, not some. A love that can take hold of our hearts and lead us to lives of meaning and purpose. Our gospel of Universalism is big enough and generous enough and loving enough to capture the hearts and minds of the people.

Sometimes folks say to me, “Rob, this gospel of Universalism almost sounds too good to be true.” When they do, I always remind them of something that Mae West once said. She warned, “Too much of a good thing . . . is wonderful!” Other folks worship a God of some souls, and they have the audacity to call that the “good news.” We stand for a commanding and transforming love that embraces all souls, and I dare say that is the even better news.

Adapted from “Willing to Be Changed by What We’ve Started,” a presentation at the 2011 Minns Lectures by Robert M. Hardies. see below for links related to this story, including other selections from the Minns Lectures. 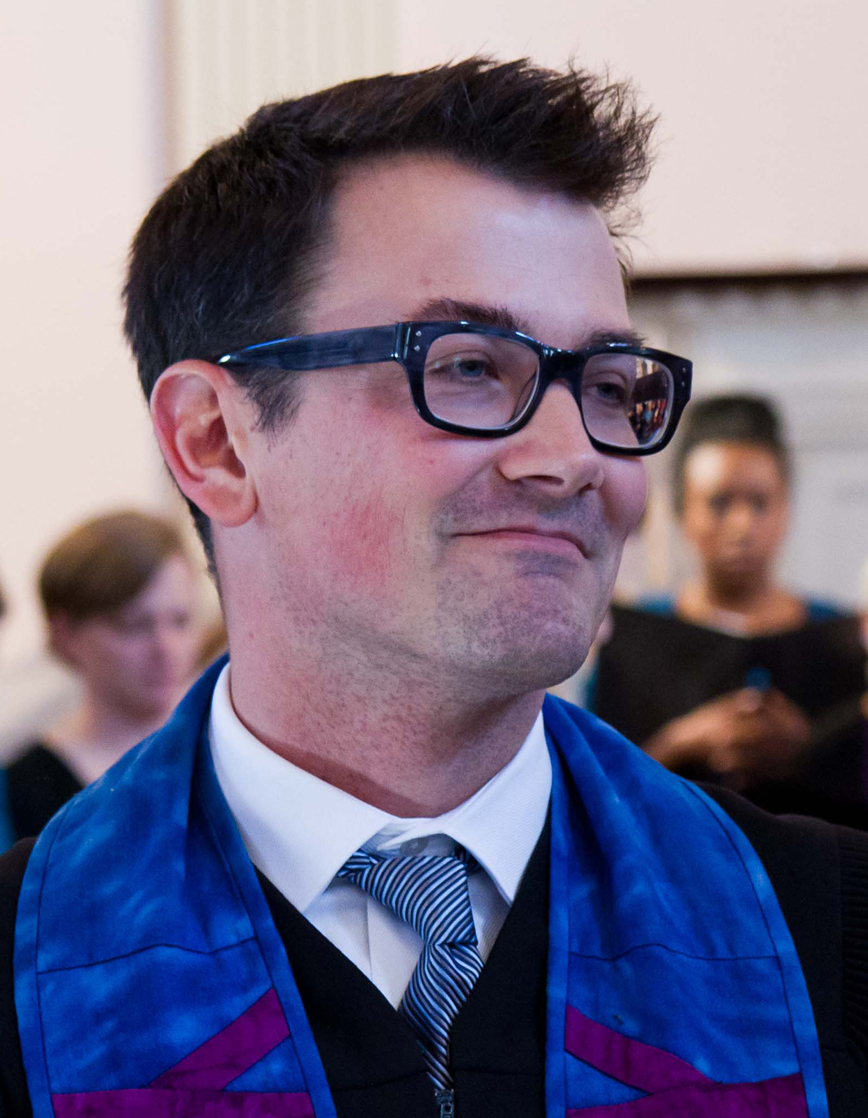 The Rev. Dr. Robert M. Hardies is senior minister of All Souls Church, Unitarian, in Washington, D.C. (878 members), and editor of Rebecca Ann Parker’s Blessing the World: What Can Save Us Now (2006).