Where was I to find a liberal religious community in the middle of Kansas farm country?

Jackie Magnuson Ash | 2/11/2013 | Winter 2012
Workshop of being
Workshop of being
Jackie Magnuson Ash
2/11/2013
UU World Magazine Winter 2012 , published by the Unitarian Universalist Association
Spirit
Personal Inspiration
Peering into your past and sorting out components of your core beliefs can be a daunting task. But once tackled, you may discover something you’ve never put into words before.

I grew up on a Kansas farm. Most of the surrounding farm families were Lutherans, but we were Methodists. Bridgeport was a village so small that after the grade school closed it had only its church, grain elevator, and tiny post office/general store. I knew family names of everyone who lived in the houses lining its gravel streets: Douglas, Fagerberg, Lindholm. Some young inhabitants were my cousins, once or twice removed, and together we attended church in a white clapboard building where we learned about God, Jesus, and community.

The congregation fit comfortably enough in this little church with its hard wooden pews and communion rail. We accepted that there was no running water or inside walls. (Curtained Sunday school rooms were tucked under the two-rowed balcony.) To cool the sanctuary in summer, someone would open tall, frosted windows running along the east and west. In winter the old gravity furnace, out of sight somewhere in the cellar below, warmed the building and congregants.

Our congregation couldn’t afford a full-time minister. After our Sunday service, Rev. Zook would drive five miles down the highway to his “real” church. We had our traditions: The same people taught Sunday and Bible school; “Joy to the World” opened our evening Christmas programs; summer ice cream socials took place over at the Old Gym, which did have running water.

In December 1963 it all changed when, in the wee hours before dawn, our church building burned to the ground. Later that day, I stood at the edge of the foundation where live embers lay scattered in patches of snow. As a thirteen-year-old, I could sense my community falling away. I wasn’t to feel at home in any other church for a long time.

Being a serious child, I took to heart remarks and questions about God. When I was around eight years old, my great-uncle Louie, who lived with us, asked me if you have to close your eyes to pray. I thought about this for a day or two and decided when you closed your eyes to pray you gave God your full attention, akin to looking someone in the eye when speaking. I announced this at the supper table where all my family, not just Louie, could benefit from my wisdom. I now imagine my older sisters with quizzical looks on their faces: Who asked?

As a teenager in Sunday school, I asked our teacher how a loving God could condemn to hell all Jews, or the vast majority of Chinese people, because they didn’t take Jesus as their savior. To his credit, the teacher allowed a brief discussion, with consensus being it was an interesting dilemma.

I wanted to be respectful but didn’t want to invest time and emotion in a divine being who was bigoted and cruel.

As for Jesus, I admired him. Here was a man who was the literal son of God, who accepted his role in securing salvation for his fellow man even though he had free will. It must have been hard for God, too, sacrificing his son like that, but he did it for us. God, as my heavenly Father, surely took a close-eyed interest in me.

Then during my second year in high school, a classmate died in a car accident. By the time I came out of the fog of that experience, I no longer believed God watched over us. He wouldn’t have let our classmate die in the middle of the night in a vehicle rollover alongside a country road. The car accident was just that—an accident. The concept of chance had entered my worldview. God created us, but the choices were ours, and if we were in the wrong place at the wrong time, we might die.

The drift away from God continued after I entered college, although that isn’t to say God didn’t exist up there somewhere. By my senior year, the women’s movement hit full force. The Divine evolved irretrievably beyond having a gender. God wasn’t God-the-Father. God was Spirit, Love, Goodness.

A physical and emotional breakdown caused by medications made it necessary for me to convalesce at my parents’ farm the summer after I graduated. One evening Dad came in from doing fieldwork. Coated from hat brim to boot toe with a fine powder of topsoil, he slumped in the kitchen chair, too tired to get back up to wash for a late supper.

For me at that moment he represented the human condition. We exhaust ourselves getting through life, and then we die. No spiritual safety net spread itself out beneath us. The chemical imbalance in my brain caused this perception, but still it had a touch of transcendent insight. I thought I’d seen rock-bottom truth. With medical and family support, my mind moved away from this emotional desolation, and soon I healed enough to continue my life.

By fall I found a job, began to date a former classmate, and soon we married. Bob and I eventually settled and started a family in the area where we both grew up. The older generation began to die, and funerals became a frequent occurrence. During these services we were prompted to recite the Apostles’ Creed. The words made me uncomfortable. I didn’t believe in the Father Almighty or that Jesus was born of the Virgin Mary. Feeling too much the hypocrite, I couldn’t bring myself to join a local church, even for the sake of the children.

Although Dad didn’t go to Sunday morning services, he read about Christianity and found religion a worthy subject. Mother, more matter-of-fact about it, understood the value of community and saw to it that her daughters experienced the organized religious link to society. Her viewpoint pricked my conscience now and then. But where was I to find a liberal religious community in the middle of Kansas farm country to help me raise my children?

I sent my kids to summer Bible school and taught them the Lord’s Prayer and the stories of Christmas and Easter because they lived in a predominately Christian society. I wondered if there were a spiritual primer, for me as well as them, explaining the similarities and differences among Christianity, Judaism, and Islam, but never got around to searching for one. If only I could have shared a little Carl Jung, telling them about the collective unconscious where our minds are linked directly to our evolutionary past. Can you imagine them sitting spellbound as I explained that just as every set of healthy human hands includes opposable thumbs, every healthy human mind cultivates connection to nature and community, and, therefore, develops a sense of morality?

But I didn’t have the vocabulary yet and was guilty of just letting the concept of God float around in the air.

The family farm helped ease my guilt. The kids delighted in warm creek-edged mud squished between their toes, even though nearby crops lay ruined from that same creek’s overflow. They romped with young pigs that were slated to eventually die to feed a society that ate meat. They knew the smell of cut wheat, a rotting deer carcass, sweet spring clover. God existed in community, yes, but also in the duality of natural processes, and I hoped our kids would some day see spirit woven into both.

After our children grew up and left home, my husband and I had more time to contemplate life principles. We needed communal support, something to help nourish our goals and temper our failures. I came upon the word Unitarian in my reading. Bob and I looked up churches in our area-wide phonebook but found none with the name Unitarian. Then one day our daily newspaper had an article about a God-minded mathematician named Sarah Voss coming to speak at—lo and behold—the Unitarian Universalist Fellowship in Salina, Kansas. We attended and, a year later, joined without reservation. The Salina fellowship, small and with no full-time minister, reminded me of the Bridgeport congregation from years ago. At last, I again felt at home.

I’m still a serious child, wanting to stay engaged in the conversation, and I very much need a spiritual safety net. The Unitarian Universalist Principles provide that safety net, encouraging an ongoing exploration of truth, or, to use philosopher William James’s words, a “workshop of being” where we can identify without prejudice what works and what doesn’t. After listening to fellow UUs and sharing my own thoughts on more than one Sunday morning, I’ve found the words that were woefully lacking during my child-rearing years. Now I can say to my grandchildren: God is here in this tree, up there in that star, in the kiss you gave Grandma. Divine Spirit resides in stories of Jesus and every other teacher of the Golden Rule: Do unto others as you would have them do unto you.

In the end, the key to a worthy life lies in one’s having loved and been loved. Believe in the endless echoes of such a life. 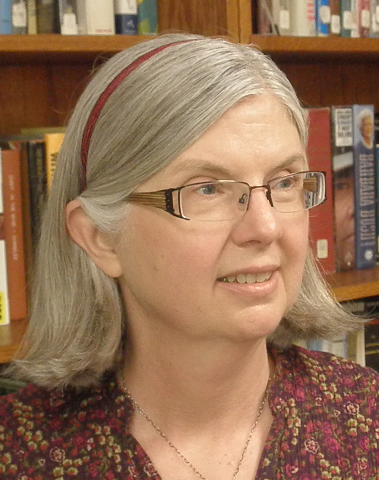