Owners of small yards can create a food triangle by connecting the garden, kitchen, and chickens.

Unable to extract the last tiny bits from an ear of August sweet corn, most people toss the cobs into the trash. Not us. We enjoy watching our chickens deftly use their pointy beaks to glean the tiniest scraps of corn. When they’re done, we toss what’s left into a nearby composter.

Corn gleanings are just one of many potential food wastes we give to our chickens. Our chickens also relish stale bread, wilted lettuce, rice caught in the sink strainer after dishwashing, and most other food scraps.

By providing safe living quarters and access to sunshine and fresh air to our tiny flock, we gather a couple of dozen eggs weekly. While converting waste to eggs, chickens mute the environmental and humane horrors of modern agriculture. There’s more. Our hens give us nitrogen-rich droppings, which we mix with high-carbon food scraps they can’t eat, like avocado and citrus skins and corncobs. After a few months, the resulting rich compost helps summer’s vegetable plants leap from the soil. Our garden feeds us, while weeds go back into the chicken run, where our hens pick out protein-rich insects and snack on tender leaves.

Once wild jungle fowl inhabiting Southeast Asia, chickens were likely domesticated for their ability to glean insects and weed seeds that people can’t eat and convert them into eggs and meat they can. As ancient people migrated to new lands, they brought chickens with them. It’s been a symbiotic relationship ever since.

The chicken’s complex genetic makeup may be the bird’s curse and benefit. Selective mating enabled twentieth-century breeders to transform a hen that once laid 150 or fewer eggs a year into hybrids that produce double that number. Confined to tiny cages and fed a concentrated ration in massive factory farms, these unfortunate creatures never enjoy sunshine, fresh air, flight, or a varied diet. Their life is snuffed out at the close of their first lay cycle when they are barely a year and a half old.

Broiler chickens fare even worse. Until the development of the Cornish-Rock hybrid, it took a rooster chick at least a dozen weeks to reach table size. Today’s hybrids grow so fast their legs have trouble holding them upright. If these plump adolescent birds are not butchered at six weeks many develop genetic deformities and die before maturity.

The modern science that developed layers and broilers able to efficiently convert chicken feed to human food made chicken and eggs the least expensive animal protein. It came at a cost. Beyond the short lives the animals endure is the vast infrastructure needed to support mass chicken production. Intensive agriculture—sustained by diesel fuel, artificial fertilizer, and pesticides—grows the grain and soybeans that constitute the commercial chicken ration. Byproducts are fouled waterways and carbon dioxide sent skyward.

The rugged chicken that previously coexisted with people disappeared from backyards when vast subdivisions were built after World War II. Many towns passed ordinances banning chickens, the only significant food-producing animal well adapted to live in small backyards and cities.

Times are changing. Many more fortunate chickens now live in small flocks tucked into suburban and urban backyards. So strong is interest in backyard chickens that progressive towns have altered ordinances to allow modest flocks, usually limited to four or six hens and no crowing roosters.

Younger generations who grew up in families who sourced all food at the grocery store are today’s group most likely to build or buy a tiny coop and stock it with a few hens. They want their children to learn where food really comes from, gain responsibility by caring for animals, produce healthy eggs, and avoid environmental and humane issues caused by commercial eggeries.

Raising a half dozen hens has never been easier. Hatcheries mail small numbers of chicks to families across the country [disclosure: we blog for a commercial hatchery]. Opening a box of peeping babies is thrilling.

Hardy backyard breeds that once strutted around small farms are too inefficient for big agriculture but work perfectly in backyard coops. Many are named for the places they were developed, like the Rhode Island or New Hampshire Reds, Buckeyes, and Jersey Giants. Quiet, calm Orpingtons trace their origin to an English village. There are hundreds of breeds. Many are quiet, gentle, intelligent, and friendly to their human caregivers. Some lay blue- or green-shelled eggs, but generally brown egg layers are most common in small flocks.

Owners of small yards can create a sustainable food triangle by connecting the garden, kitchen, and chickens. Food and garden waste, supplemented by organic commercial feed, sustains the birds. In return, they produce eggs for breakfast and baking and droppings for the garden. It’s a system that enables people to live gently on the earth while providing the pride and independence of producing food by coexisting with birds that are gentle, inquisitive, clean, intelligent, and sometimes downright funny. 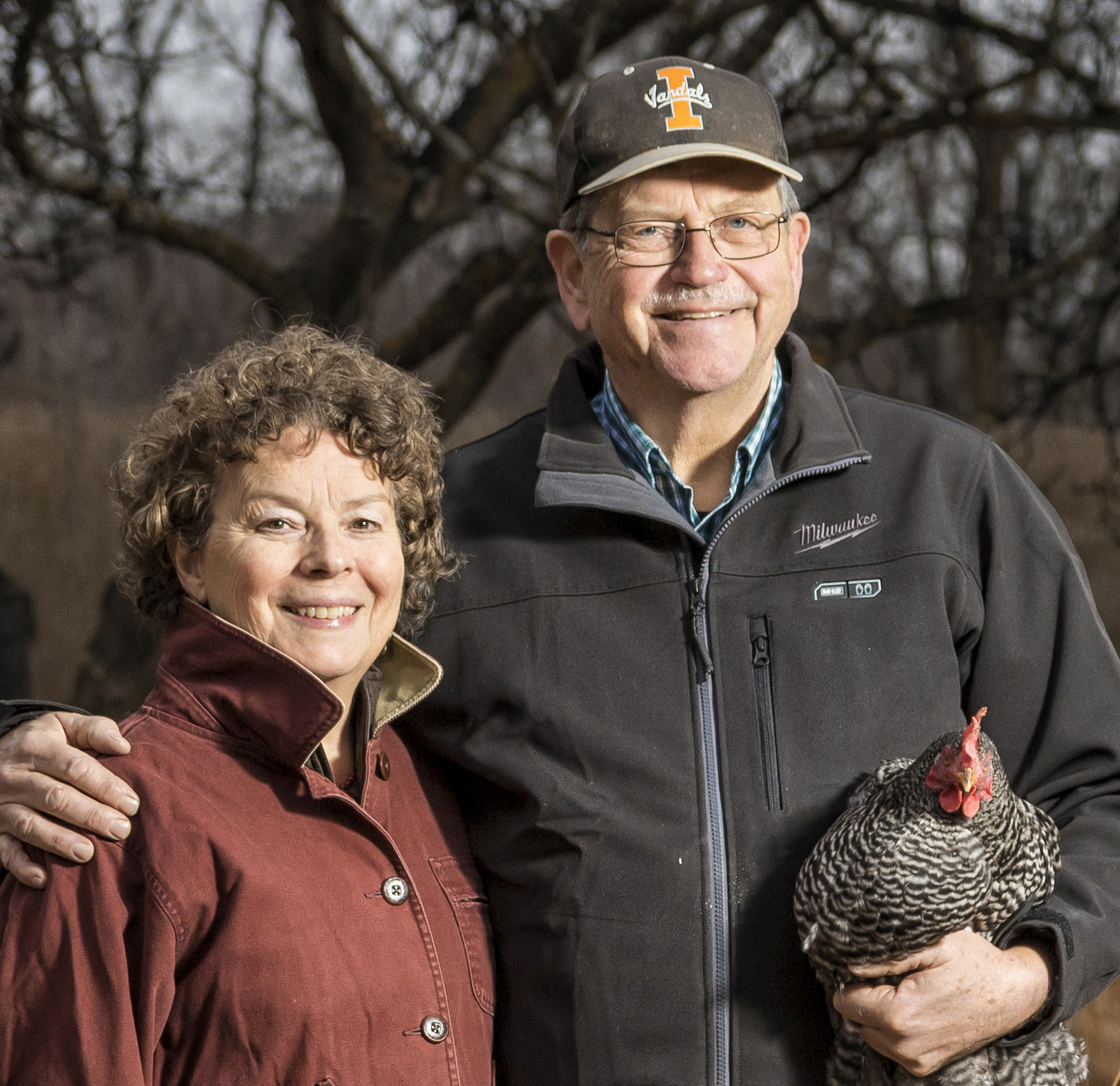 Marion Patterson and Rich Patterson are members of Peoples Church UU in Cedar Rapids, Iowa. They blog about chickens, labyrinths, and ways to enjoy yards at windingpathways.com.