Grace wins in the end

Grace and the sugary sweet are so much at odds that in order to be a friend of one you have to be an enemy of the other.

Chance Hunter | 3/7/2011 | Spring 2011
Grace wins in the end
Grace wins in the end
Chance Hunter
3/7/2011
UU World Magazine Spring 2011 , published by the Unitarian Universalist Association
Spirit
Personal Inspiration, UU Theology
Bono, the lead singer of rock band U2, gets a lot of flack for being overly earnest, but sometimes he does have something good to say. I think he has something to teach us about grace and universalism in a comment from his address to the Harvard Class of 2001: “I am a sworn enemy of the saccharine, and a believer in grace over karma.”

The first lesson I draw from our friend Bono is that grace is not saccharine. Whatever grace is, it’s not sugary sweet. In fact, grace and the sugary sweet are so much at odds that in order to be a friend of one you have to be an enemy of the other.

Now that’s a little different than what I was taught about grace growing up. In Methodist Sunday School, we learned that the word “grace” was an acronym standing for “God’s riches at Christ’s expense.” We all deserved eternal hellfire, but because Christ was publicly tortured and then lynched in our place, God would have an easier time dealing with his anger management problem. He’d take it out on his kid instead of us—never mind that this sort of behavior would have been considered reprehensively sinful if it wasn’t God doing it.

We also learned that being a good Christian meant being nice, above any other virtues, or, as we say here in the South, being sweet. It was the highest of compliments to say of someone, “Well, isn’t she sweet.” In fact, being sweet was a great excuse for avoiding other virtues, like telling people hard truths, or calling them out when they were hurting people.

Above all else, being sweet meant not rocking the boat, not making waves. It meant bringing a friend a casserole when a family member died, but it also meant not confronting that friend about their growing problem with alcohol. For ministers, it meant preaching “nice” sermons that only dealt with sins that members were a comfortable distance away from, and not confronting the congregation about, say, gossip couched as prayer requests about other church members.

Being sweet is a small virtue. There is some grace in being sweet, but much of being sweet lacks grace altogether.

Which brings us back to that word “grace.” What do we mean when we say “grace”?

Let’s get to it by way of “karma.” Remember the quote? “I am a sworn enemy of the saccharine, and a believer in grace over karma.” Karma is consequence. What goes around comes around. You reap what you sow. If something bad, or something good, happens, it’s because you deserve it. Behind a belief in karma is a belief in justice, that on the great cosmic balance sheet, every debt will be paid and every merit will be rewarded.

But the first people who believed in this sort of cosmic justice could see that not everyone receives the karma that they deserved. Some get off easy, and some find suffering they don’t deserve. Their answer to this was reincarnation. Postulating that we each lived lives before this one, and will live lives after it, allowed them to keep their belief in karma. They could look at the obvious injustices of this life and still say that karma works. If you didn’t do anything to deserve suffering in this life, they said, then it must be something you did in a previous life. This gave people a clear incentive to be good, in hopes of an easier time in their next life, but it also makes your misfortune your fault, even when it was clearly someone else’s fault.

A belief in this sort of karma stacks the deck against the poor and oppressed. Why help them when their suffering is clearly their fault to begin with? Before long, millions of people are considered “untouchables,” as we see even today in India, even after the caste system has been officially abolished. You suffer, says karma, because life owes you a hard lesson.

Now, I believe that karma has its place. We need to always be aware of the consequences of our actions, being especially mindful of that most insidious form of consequences—unintended consequences. But we’ve all hurt enough people in our lives that if karma is all there is we’re all really in for it. If all we get is karma, everyone loses. It will be an eye for an eye until the whole world goes blind, as Gandhi put it.

Which is why we should all be rooting for grace.

So what is grace? Grace is getting more than we deserve. It’s not winning the jackpot—winning the lottery is luck, not grace. Instead, grace is finding an unexpected moment of peace while taking a walk. Grace is learning something new and amazing about a friend you’ve had for years. We encounter grace when we hear a song by a group we’ve never heard of that changes our lives, or when we make a difference volunteering because we signed up and showed up.

Grace can feel like a wave of relief or a spike of pain, but it always leads us in the path of more hope, more trust, more love.

Grace is always there, waiting to happen. Grace is very patient. And polite. Grace never imposes itself. Grace can surprise us, but it doesn’t force itself on us. Grace is a willing partner and a constant friend, but it never invades, even when our experience of grace feels overwhelming. This is at the core of the universalist message: There is always more than enough grace to go around.

There’s no amount of good deeds we can do, and there’s no magic prayer we can pray, that will guarantee we receive grace. We receive grace, not because we deserve it, but because the universe is fundamentally a generous place. That there is life at all is a sign of grace. That there are people like us walking around on the earth after billions of years of biological accidents, that surely is grace.

Grace isn’t just something we receive; it’s also something in our power to give. In the early verses of the book of Genesis, it says that we are created in God’s image. If it’s the nature of God to give grace, then it’s our nature, too. We are most like God when we are being graceful to one another, when we make room for the presence of another, whatever the consequences.

At times it’s hard to trust in grace. Whether it’s our karma or someone else’s we suffer from, the path of grace can be hard to make out. We may be tempted to despair and say that no good deed goes unpunished. We may be tempted to take advantage of the grace of others and say that it’s their job to provide grace to us so that we can consume it. But no one owes us grace, and grace will not be consumed. Grace—however received, however given—is always a gift.

Here, then, is the good news of universalism about grace and karma: Karma may win the day, but grace wins in the end. The cycle of error, payback, and consequence may have us trapped, for now, but in the end grace will free us from the trap of karma. Grace is wily, and it’s not above using karma, without karma’s knowledge, to reach us with unexpected moments of serendipity and growth. Come what may, there is always more grace.

This essay was adapted from a homily delivered to a new Universalist worship group at the UU Church of Atlanta in October 2010. 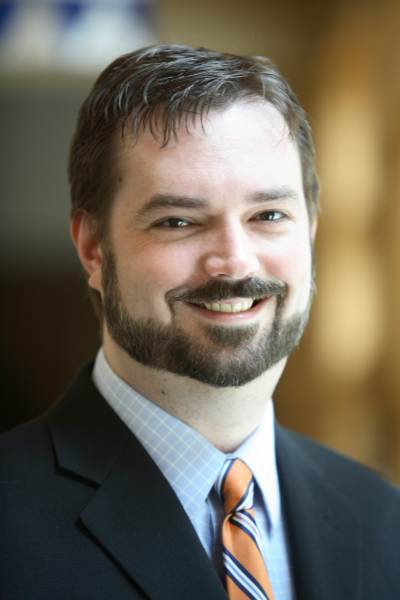 Chance Hunter is a graduate of the School of Theology at Boston University. From 2007 to 2010 he was the director of Welcome Ministries at the Unitarian Universalist (UU) Church of Atlanta. He and his family now live in Oklahoma City.