Hearing others' stories reveals their humanity

We affirm women's dignity, yet UUs still wrestle with the systemic undercurrents of misogyny.

Kevin (not his real name) and his girlfriend Joann (not her real name either) had joined me for lunch after church, and our conversation drifted toward #YesAllWomen, the Twitter hashtag that went viral after the Isla Vista shootings in May.

Kevin, one of the most gentle and progressive men I know, was struggling to understand why the two of us, who had never personally experienced sexual violence, were so adamant that #YesAllWomen spoke a universal truth. How could it be that every woman could say she lived under fear and frustration due to systematic misogyny?

That’s when I asked Joann to pull out her keys as though she were going to her car alone, while I did the same. Together, we held our keys like weapons, each key sticking out between our fingers like a mismatched set of brass knuckles.

I reminded him that while not all men act on impulses, women don’t know which ones will and which ones won’t. And Kevin let out a quiet “oh” as he finally got it. Our conversation then veered toward recognition of privilege and how moments like this help us be more sensitive and better allies.

Unfortunately, not every conversation during that period was so positive, and there was a great deal of pushback, with arguments full of false equivalencies and accusations of emotionalism. And on the heels of the Hobby Lobby decision from the U.S. Supreme Court, women have faced another round of backlash for voicing frustration at this infringement on women’s health. For many of us, the two events frame a greater injustice, namely, systematic misogyny that is allowed to flourish in our homes, our faith communities, our laws, our corporations, and our entertainment.

As Unitarian Universalists, we affirm the inherent worth and dignity of every person. Every person. This principle isn’t just about a state of being—it is ethical. We are called to affirm inherent worth. And many of us do affirm women’s dignity: many of our congregations open their doors to Planned Parenthood and now meetings when no one else will. Many of our members fight for reproductive rights. Our sexuality education program, Our Whole Lives, promotes healthy boundaries and healthy sexual behavior.

Yet UUs still wrestle with the systemic undercurrents of misogyny. Female ministers struggle in our pulpits. They face criticism over their clothing, their hair, their accents, their childbearing responsibilities. They struggle with challenges to their ministerial authority. They bring the truths of #YesAllWomen to their pulpits, but if they talk about women’s issues more than three times in a year, they are condemned for being one-issue preachers.

So what can we do?

Conversations at this year’s General Assembly in Providence, Rhode Island, revealed that many of us had set women’s issues aside in favor of others that are getting more traction in our denomination—worthy causes, like climate change, LGBTQ rights, and immigration justice. But these conversations also revealed a renewed call among many of us to stand on the side of women.

The Rev. Marti Keller, the affiliated community minister with the Unitarian Universalist Women’s Federation, is calling for us to examine our Congregational Study/Action Issue on reproductive justice to see where we can address issues of discrimination, harassment, and hate crimes. The staff of Standing on the Side of Love posted an amazing story and call to action that included many links to resources for women’s safety and health.

Discussions are popping up at coffee hours, in committee meetings, and in our social media networks. Some are looking for ways to coordinate our resources for the fight. Others are starting to create spaces for people to tell their stories. This step is vital: when we hear another’s story, we see that person’s humanity. The particularities of people’s stories reveal universal truths; they make it harder to discriminate and harm others. And for those who have suffered, it helps the healing to know we’re not alone. Women’s stories of harassment, violence, discrimination, and health at risk must be told—and not just to other women but to everyone.

We cannot keep silent. We cannot get caught up in a flurry of anger and then let the issue subside. If we are truly to do justice in the world, we must do justice among each other. We must heal our own systems; we must hear our own stories, so that we can be a prophetic witness to others. We must keep connecting.

Most of all, as we figure out the best ways to reach out in love, we must keep talking. 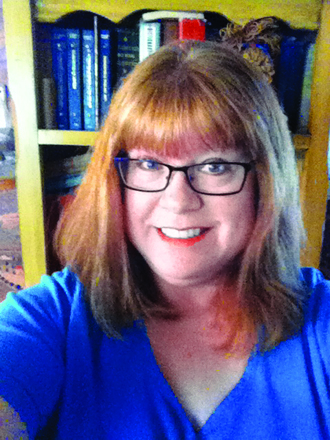 The Rev. Kimberley Debus recently served as minister at First Universalist Church of Southold, New York. She is currently building a community ministry of the arts in the Capital Region of New York.