‘How do I keep my heart open?” a college student asked me. As a chaplain on a college campus, I often get asked interesting questions, but this one stopped me for its radical honesty.

The student had been consumed by a Facebook conversation that had turned emotionally toxic. She had been trying to name how antisemitism functions, but ended up feeling piled on in such a way that after responding she was exhausted, facing emotional burnout for trying to engage in the social justice dialogue she craved.

I appreciate this student’s concern for how to remain connected with herself and others while grappling with significantly painful online conflict. Figuring out a personal rhythm of activism that is sustaining and not life-depleting is a contemporary challenge for many, whether on Facebook or face-to-face.

As a chaplain and director of spiritual and religious life on a college campus, I often talk with people about connecting actions and values, the importance of spiritual practices, and becoming linked into communities of support in order to sustain work in social justice struggles.

I was stopped by this student’s question because it belies a core fear—and a core hope. The fear is having a heart become so hardened it can no longer connect. The hope is to remain open and not cease engagement with the world.

I am a Unitarian Universalist. I am also an assimilated, white, ethnic Jew. Unpacking the relationships between internalized and societal antisemitism has been a critical part of understanding both the benefits my family attained on its multigenerational journey of assimilation and the price we paid in this process.

My family began life in the United States as European Jewish immigrant “others” in the late 1880s and had passed into whiteness and its privileges by the mid twentieth century. But some of my cousins survived the Holocaust, landed in the rural south, and were targeted by the KKK who burned a cross on their lawn and drove them from their home. As a white-skinned Jewish person, I experience the benefits of whiteness bestowed upon me in a racist society, and part of the soul-crushing price my Jewish family paid to assimilate into “whiteness” included estrangement from our cultural Jewishness and disconnection from Jewish religious practices and traditions that restore joy and resilience.

As a pre-teen, seeking to understand my Jewishness, I ingested a glut of young adult literature focused on white Jewish girls fleeing the gestapo with dogs at their heels. I absorbed transgenerational Jewish trauma but didn’t have many celebratory connections with Jewish life. Thus, what I picked up was an overly simplified internal narrative that equated Jewishness only with victimization. Simply put: I was terrified of being Jewish.

Jewishness always marked me as a little bit “other.” As writer Helen Rosner describes, Jewish whiteness is “conditional.” Christian hegemony, antisemitism, and race interact in complex ways; white-passing Jews benefit from and can perpetuate the violence of white supremacy against non-white peoples, while also being targeted by white supremacists for being “imposters” who are “undeserving of whiteness.” We can also be targeted for being non-Christian or specifically for being “white-passing non-Christians.”

It wasn’t until later in life that I saw my deeply internalized fear of being Jewish was part of internalized antisemitism and anti-Jewishness. When I realized how cut off I was from my own constructive relationship to my Jewishness, how separated I had become from my ancestors and cultural inheritance, something inside me started to heal and become more whole.

Like my Facebook-weary student, speaking up about antisemitism and how it functions to prop up white supremacy culture feels a bit risky. But that’s how I know it is important. I talk with undergraduates on campus about creating “brave spaces” rather than “safe spaces” where people can practice honestly naming their truths, and thereby practicing the messy and vital work of justice-seeking. I hope we can create more brave spaces in Unitarian Universalism to talk about how antisemitism operates.

After the violent demonstrations in Charlottesville, Virginia, we convened two events on campus aimed at helping students process what was on their minds and access their own personal stories for strength and healing. I continue to do my own spiritual homework, which includes unpacking the layers of white supremacy culture without and within. Challenging antisemitism is involved in deconstructing the whole house that white supremacy culture has built so that new formations of liberated human community can exist.

Hazrat Inayat Khan has written, “God breaks the heart again and again until it stays open.” I don’t know whether God exists in this manner. I do know that a heart, once broken, will sometimes start to close. Sometimes the world is so tough, it’s hard to safeguard the heart. Sometimes hearts need protection and rest. This is to be honored. 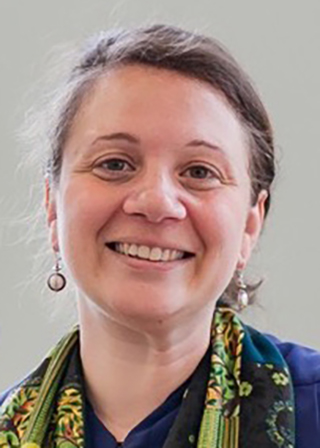 The Rev. Dara Olandt is chaplain and director of spiritual and religious life at Mills College in Oakland, California, and a lifelong UU of Jewish heritage.