This essay appears as part of “We’re Right Here: Transgender and Nonbinary Unitarian Universalist Leaders” in the Summer 2019 edition, developed in collaboration with TRUUsT and edited by the Rev. Theresa I. Soto.

As a UU, I was raised to ask questions. I was raised to question everything that was presented by society as “normal” in my life—the segregation and racism of my hometown, the idea that adults knew more than children and youth, the expectation that I was a girl who would grow up to be straight.

So when I was 13, and all of my friends were crushing out on boys, I wondered what my truth was. When I ascertained that yes, I was attracted to boys, I next wondered if that was all there was to the story. I began thinking of myself as bi-ish. Then bi. Then pansexual. Then queer. Instead of agonizing over figuring out who I was, or struggling with my sexuality, or denying my true self, I was blessed with the space to simply allow my truth to be true, even as that truth changed over time. This journey of living into my truth wasn’t a linear search for who I “really” was, discarding different lies or half-truths as I went along until I found the one, true, ultimate, enduring Truth about who I was. When I was 16 I was bi-ish. That was my truth. Who I am today does not negate who I was when I was 6, or 16, or 26. All of these truths are true.

My gender is also a story of many truths. Although the word genderqueer was originally coined in the ’90s, I certainly didn’t have access to it, or to any nonbinary role models in the wider world. I had no language to describe who I was, so I simply was. I was excessively feminine and masculine all at once, drawn to theater and drag and art, understanding my body as both intimate and foreign, as a canvas for expression. I chafed at every expectation the world had for me based on my perceived gender. I knew what wasn’t true, so I made choices, one by one, that brought me closer to ease, closer to myself.

The mythology of the closet is that I should have struggled for years under the weight of being different, that once I realized who I really was I should have lived in pain and suffering trying to deny or suppress my deviance, that when I felt I had no other choice I should have eventually screwed up the courage to “come out,” and that finally I should have burst out of the closet I had been living in, fully formed as my new, authentic self, cutting all ties to the miserable and false me that I had been before.

Although this narrative is a patchwork that reflects many peoples’ truths, it is certainly not a universal truth, and none of it is my truth. I was born outside the closet, thanks to generations of fierce ancestors who paved the way and made this possible for me. And thanks to Unitarian Universalism. Thanks to my queer UU faith.

Queer theory was born in the early ’90s as part of queer activism, which pushed back against the growing segment of privileged gay and lesbian people arguing that they were just as “normal” as straight people. Queer activism rejects the idea that normal is worth striving for and aims to tear down or transform oppressive social systems and structures like marriage, rather than just trying to extend them to benefit a few more people.

Queer theory is rooted in post-structuralism, which teaches that there is no such thing as a single, universal, absolute truth; that there are always multiple—even contradictory—equally true interpretations and meanings of something. Queer theory also questions everything that is presented as truth based on social norms like the gender binary. It upends and rejects those norms.

Queer theory does not put stock in a static and immutable Truth about who a person is, based in the idea that they were “born that way”—that their gender, sexuality, race, or any number of other things about them was hardwired into them. Instead, it emphasizes the choices we make. It’s first and foremost about what we do and how we experience the world, not who we are or how we identify.

This sounds a whole lot like Unitarian Universalism to me.

So to me, Unitarian Universalism is a queer faith. At the core of Unitarian Universalism is the idea that my truth and your truth can both be true, even if they contradict each other. To me, queer can mean liberation and to you queer can mean a painful insult and neither of us is wrong. Both of our truths are equally valid. This is the most powerful theology I can imagine.

However, in order to tap into our super power as a religion, we can’t just coexist without meaningfully engaging with each other’s truths. We can’t gloss over our differences and expect that they will never affect our relationships or our community.

Queering faith means turning social conventions upside down. It means actively talking about our different beliefs, deeply sharing the practices that make each of us feel connected and grounded, and experiencing joy and wonder in how different they are. My queer faith teaches me that my truth does not depend on you having the same truth. That when both of us can live from a place of truth—different truths!—when both of us can come fully alive from those places of truth, and honor each other’s truth, then both of us will be free.

It’s incredibly vulnerable to share the truths and practices that live close to our hearts and souls. It can be incredibly uncomfortable to try to understand something foreign or embrace the fact that something that feels constricting or painful to you makes another person feel freer.

Yet to me, this is what it means to be a Unitarian Universalist. It’s only by taking these risks that we can tear down the walls between us, challenge what we have been served up by mainstream culture, and truly be in relationship with one another. Together we can queer our faith and choose a different path. Toward justice. Toward healing. Toward life. 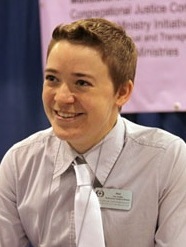 Zr. Alex Kapitan is a lay community minister, organizer, educator, and editor. Ze is a co-leader of the Transforming Hearts Collective and the founder of Radical Copyeditor.

Nothing we do will be perfect

Nothing we do will be perfect

To work for justice, religious liberals should let perfectionism go.