Tom Owen-Towle | 12/26/2011 | Winter 2011
Quietude
Quietude
Tom Owen-Towle
12/26/2011
UU World Magazine Winter 2011 , published by the Unitarian Universalist Association
Reflections
Personal Inspiration, UU Theology
Words are wondrous vehicles, and Unitarian Universalists will never abandon them by descending into utter stillness and hush. Yet their fragility—indeed, inadequacy—is acknowledged more and more. One of the paramount lessons of growing up theologically is discerning when words are necessary and when they’re futile or even potentially harmful.

We can’t hear humans talk unless there’s silence. The more complete the silence, the more expressive the speech. There’s no gratitude comparable to the gift of appreciative silence.

In the presence of ex­quisite art, the stillness of a forest, the quietude of the vast desert, the solemnity of the mountains, the tranquility of gently falling snow, the ocean when waves are resting, composure in the face of unspeakable tragedy, or the ineffable wonder of human love; in the presence of all these and more, silence resounds. As the psalmist declares about the heavens, “There is no speech, nor are there words; their voice is not heard; yet their voice goes out through all the earth and their words to the end of the world.” (Psalms 19:3-4 NRSV)

Some religious folks seem to think that the number of times they mention the word God during conversation or worship predicts, even hastens, the presence of the Infinite. Hardly. One church member, coming from a fundamentalist background, was initially disconcerted by the paucity of times that God’s name was spoken during our worship services in San Diego. After months of increasing involvement, however, Marsha paid our band of freethinking mystics a high compliment: “I’ve never worshipped in a religious community where the word God is so rarely mentioned yet the reality of God so recurrently felt. I now feel balanced as a Unitarian Universalist, bridging both heaven and earth. Hallelujah!” Indeed, spiritual equilibrium is the objective in our religious quest, where the intellect and soul, hush and utterance, rationality and intuition are equally affirmed.

Nineteenth-century British Unitarian James Martineau claimed that words were fragile containers in conceptualizing the theological quest, but ultimately needed to be used. He maintained in Endeavours After the Christian Life:

[T]he confession of our ignorance once made, we may proceed to use such poor thought and language as we find least unsuitable to so high a matter; for it is the essence and beginning of religion to feel, that all our belief and speech respecting God is untrue, yet infinitely truer than any non-belief and silence.

Perhaps. To be sure, words are essential in conceiving, then conveying, messages about anything theological, including the Unknown. However, we dare not underrate the power and relevance of silence as a uniformly valuable (not lesser) vehicle for luring the sacred into our sphere or us into its embrace.

Ralph Waldo Emerson, in pointing to the numinous, said, “I like the silent church before the service begins better than any preaching.” For, as he stated elsewhere, “Let us be silent, so we may hear the whispers of the gods.” This counsel was delivered from a consummate wordsmith.

But what about God’s silence? Jack Miles, in his literary analysis of God as a character in God: A Biography, points out that the eternal spirit has proven to be progressively quiet and uninvolved: action yields to speech, which yields in its turn to silence. As Miles states it:

God’s last words are those he speaks to Job, the human being who dares to challenge not his physical power but his moral authority. . . . God never speaks again, and he is decreasingly spoken of.

Despite what God may or may not be up to, there remains ample moral challenge, so claim Unitarian Universalists, for humans to pursue. Our work is fairly transparent. And a portion of it is to keep our lives lubricated with adequate periods of solitude, stillness, and silence.

The sacred enterprise beckons us to be speechless and dumb sometimes, to still our mouth, then our mind, finally our will, to shut up fully before we dare to open up freshly to the bidding of the Spirit. It calls us to enter the silence, so the mystery within us might connect with the mystery beyond us. 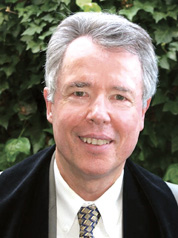 The Rev. Tom Owen-Towle has been a parish minister since 1967. He is the author of several books, including Growing a Beloved Community: Twelve Hallmarks of a Healthy Congregation (Skinner House, 2004) and Theology Ablaze: Celebrating the 50th Anniversary Year of Unitarian Universalism (2011, Flaming Chalice Press).

We do ourselves a real disservice when we discount our bodies as unworthy of reverence.