A message to white Unitarian Universalists.

I wanted to write to my sibling white UUs, to share how my attitude towards policing has dramatically changed over the last fifteen years.

As I watch the news unfold this week, I feel heartbroken and angry. I also feel something else—trauma. As I watched the videos of police cars in New York City and Columbus, Ohio, drive into crowds of people, I felt in my body the fear and trauma of what it was like to be on the streets in Charlottesville, Virginia, when the police stood and allowed armed white supremacist, white nationalist, antisemitic, neo-confederates to attack peaceful, faithful counter-protesters who had come to witness against their hatred.

I also notice how my left arm is hurting. The one that Sheriff Joe Arpaio’s deputies tried to break, the one that had scars on it for years from the zip tie handcuffs they used on me when I was arrested in Phoenix, Arizona, in 2010.

We must demilitarize and defund the police. We must defund and decarcerate the jails.

My experiences are minor in comparison, and I only experienced them because I chose solidarity with communities of color. That choice taught me a lot about whiteness, about policing, and about the United States.

Listening to and organizing with Black and brown communities in Phoenix, I learned how my neighbors lived under a virtual police state. Their neighborhoods were constantly surveilled by police, and in Southern Arizona, by Border Patrol as well. Police, sometimes in riot gear, would move through neighborhoods and apartment buildings knocking on doors, stopping pedestrians and people in cars and on bikes, asking for documentation. Listening to Black organizers in Cleveland, Ohio, as part of the Issue 1 campaign in 2018, the story was similar. Police surveillance is constant in many communities of color in the United States.

As white people—especially those with class privilege—we are taught that police protect and serve the community. They are seen as “helpers.” We teach our children if they are lost, in danger, or need help, to look for a police officer. And largely, through most of my life, this narrative has matched my experience. However, the killings of Tamir Rice and Aiyana Stanley Jones are devastating examples of why Black people, Indigenous people, and people of color (BIPOC) cannot teach their children this.

Uprisings are occurring across the country because police have never been “helpers” for most Black people in the United States, nor for most Indigenous people and people of color. As with so many experiences of inequity in this country, white supremacy shields white people from harm while teaching us to disbelieve the lived experience of our Black, brown, and Indigenous neighbors.

The system of policing in the United States evolved directly from slave patrols: groups of armed white men authorized to protect white wealth and white safety, and to control and destroy Black lives. It’s not coincidental, then, that police have frequently been involved in lynchings and the violent enforcement of segregation, including the segregation that persists today. It’s not coincidental that Ahmaud Arbery was murdered by a former police officer, or that we are seeing footage of police literally crushing crowds of Black protesters under squad cars and horses.

The recent news stories of Amy Cooper, a white woman who called the police on a Black man in Central Park when he asked her to follow the rules and keep her dog on a leash; and of Tom Austin, a white man, calling the police on Black tenants in his own building, illustrate exactly what policing in America is: a system rooted in anti-Blackness that assumes and reinforces expectations of white innocence and Black guilt.

What we must come to understand as white Americans is the fundamental role policing plays in upholding white supremacy. The uprisings we are witnessing around our country grow out of generations of injustice for Black communities: voter suppression, environmental racism, mass incarceration, inadequate healthcare, divestment from schools, lack of employment and housing, and more. As the people rise up, sparked by the police crushing the life out of George Floyd in the middle of a pandemic that is killing Black people at disproportionate rates, the response from police and the state has been to yet again try to silence through force the people crying out for liberation, crying out for justice.

This brutal, militarized policing system is necessary to maintain such widespread disparity and racial and economic inequality. It is a tool of oppression and not of safety.

As I write this, I am also thinking about the people I know who serve in law enforcement. These include members of congregations that I have served whom I love. I hold your humanity, your worth and dignity. This is a corrupt and dehumanizing system that is damaging to those who are agents of it and those who are its victims. I think of the words of Julia Ward Howe, who wrote the Mother’s Day Proclamation designating Mother’s Day as a day when women should leave their homes and all gather in the streets demanding, “Our sons shall not be taken from us to unlearn all that we have been able to teach them of charity, mercy, and patience.”

Howe was mobilizing women to demand an end to war. And today, we, white UUs, need to join the Black-led, people of color–led organizing that is demanding we defund policing, defund the system that has created mass criminalization and mass incarceration of millions of Black, brown, and Indigenous people. This system has devastated Black, brown, and Indigenous communities; it has eroded any pretense of democracy, and it has starved our communities of the resources they need—we all need—to thrive.

What would it take for us to make a commitment not to call the police again?

This system is deadly, and it chokes off the ability of our communities to live and thrive. While our law enforcement, prison, and military investments grow, education, housing, healthcare, and social safety net programs starve. Indeed, we have chosen criminalization to respond to poverty, addiction, mental health issues, and homelessness—all symptoms of the larger divestment from public goods driven by the profit motives of capitalism.

We must demilitarize and defund the police. We must defund and decarcerate the jails. The notion that these systems create safety is a lie of white supremacy, capitalism, and colonialism. Just as we witness in the commentary on the present uprisings, it has always been to protect wealth and property—not life, and certainly not Black lives. We can’t reform the current system of policing in America. We must find a new way to keep one another safe.

When I first began to understand this, I realized I had been so shaped by the idea that policing was inevitable that I was unable to imagine any other way. However, when I think back to what kept me safe in Charlottesville, it was the people I was on the line with who helped me run to safety. It was also the anti-fascists, Antifa. They put themselves between the clergy and the white supremacists charging for us and bought us time to run. It was the business owners who opened as safe houses so we could get off the street, get water, and be cared for. It was the volunteer first responders in the streets and the clergy who helped get people care after the car drove through the crowd, injuring many and killing Heather Heyer. In Phoenix, it was the safety teams trained by Puente Arizona in de-escalation and community care and the volunteer medic teams that kept people safe. More and more our congregations are using this model, and we’ve done it at General Assembly, too: training people to look out for the well-being, the care, the wholeness, and the safety of community without police.

There are a lot of brilliant, heart-centered leaders who have been imagining alternatives to our current systems of policing and prisons for a long time. You can see some of their work linked in the resource list below this message.

I recognize that this may be to some a very radical message; it would have felt that way to me fifteen years ago. I remember all the questions I had when I first seriously considered that we might need to entirely dismantle the system of policing in this country—all the “what about when”s and “but how would we”s. And if you are encountering these in yourself as you read this, I want to invite you and all Unitarian Universalists, and in particular fellow white UUs who have mostly experienced the police as operating in your interests, to pause, and breathe, and open your hearts as you—as we—begin to deeply interrogate this system.

Pay attention to what is unfolding in the streets and in the halls of power. Stay focused on the actions of the police and the military. If you are committed to nonviolence, ask yourself how this violent, dehumanizing system could ever bring peace or justice. Ask yourself what it would take for us to never have another George Floyd, Breonna Taylor, or Tony McDade killed by police. What would it take for us—individuals, congregations, communities—to make a commitment not to call the police again? What does care and safety and well-being look like when safety is not reliant on militarized police and prisons?

This is a time in our country when so many insidious forces seek to divide us and give us false and empty dichotomies that only lead to more destruction. We need to remember our Unitarian Universalist values in this time. To remember that we are one in creation, one in God, as our Universalist forebears said. We are in this together, and we need each other to survive. These are frightening, devastating times. How we show up in this time, and where we put our hearts, resources, and commitments will define who we are and what the future holds. We must all find ways to support the uprisings. We must find the sources within ourselves to give us courage in this moment to resist, to risk, to sacrifice for this movement that needs all of us to succeed.

Resources for beginning to think about abolition 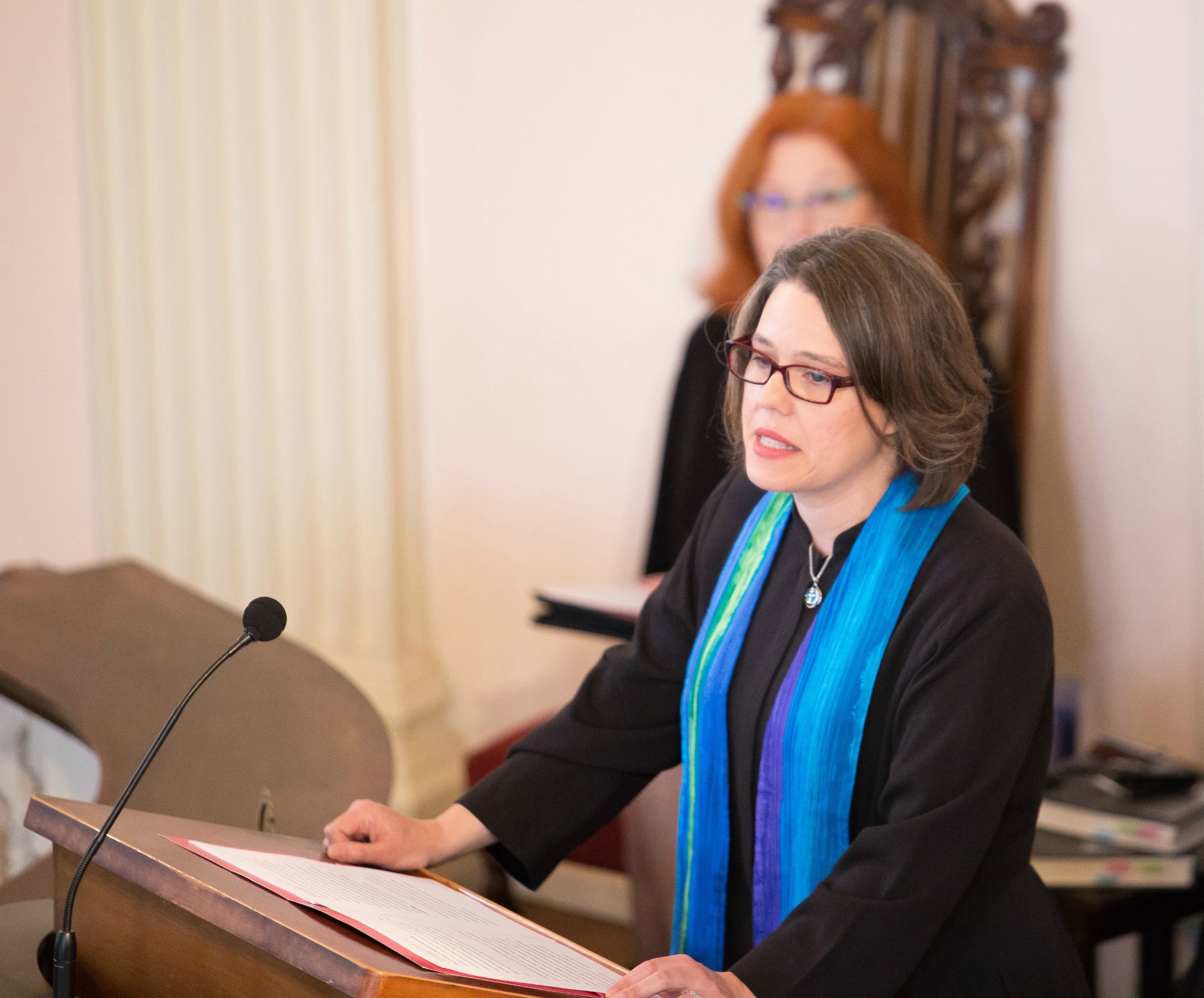 The Rev. Susan Frederick-Gray is the ninth president of the Unitarian Universalist Association. She was elected in June 2017 to a six-year term after serving congregations in Phoenix, Arizona; Youngstown, Ohio; and Nashville, Tennessee. She lives with her husband, the Rev. Brian Frederick-Gray, and their son.

The practice of our faith

The practice of our faith

This is no time for a casual faith. And we Unitarian Universalists must remember that we are not in this alone.

A pastoral letter to Black UUs

A pastoral letter to Black UUs

How is it with your spirit today? Today, my spirit is struck by grief.